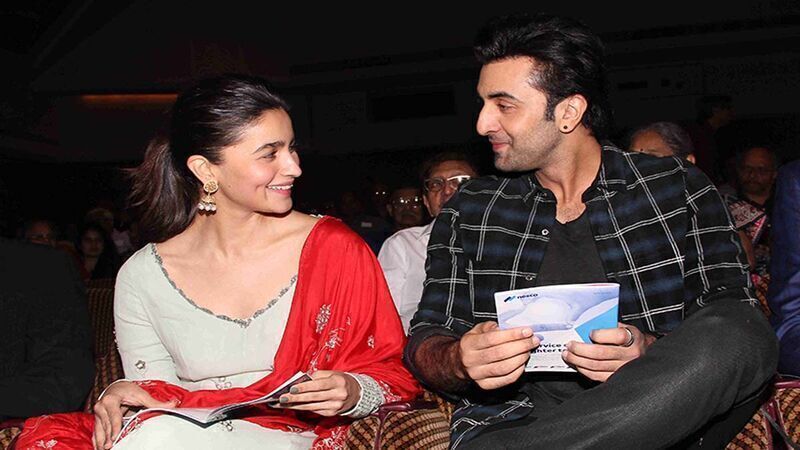 Earlier today, actor Randhir Kapoor exclusively spoke to us and denied rumours surrounding his nephew, actor Ranbir Kapoor’s wedding with his girlfriend, actor Alia Bhatt as reports claimed that the lovebirds are all set to tie the knot in the second week of April in Kapoor family’s ancestral home, RK House in Chembur, Mumbai.

When we reached out to the Kal Aaj Aur Kal (1971) actor, he said, “I’m not in Mumbai right now, and I haven’t heard anything about the wedding. If such a big wedding was happening at our house, somebody would have surely called me up and informed me.”

As Ranbir and Alia fans continue to look forward to the highly anticipated wedding, we bring to you 10 most memorable and mushy things that the lovebirds said about each other:

Alia: I am very fortunate to be around him at this point in my life

Reacting to relationship speculations, Alia during an interview with Hindustan Times in 2018, said, “I haven’t asked Ranbir [if rumours bother him]. I don’t know how he feels about those rumours. He won’t feel anything as he will be exactly like me (smiles). But there is nothing to feel. There’s no need to clarify or deny anything. He is a very good human being, and I am very fortunate to be around him at this point in my life.”

Ranbir: Hope that I have the opportunity in Brahmastra to make a great cinematic couple with Alia

In an interview to Hindustan Times in 2018, Ranbir, addressing rumours about a relationship with Alia, admitted to being in a “happy, positive and beautiful phase” in life. Talking about working with her in Brahmastra, he said, “I really hope that I have the opportunity in Brahmastra to make a great cinematic couple with Alia and do good work with her.”

Alia: I’m already married to Ranbir Kapoor in my head

During the promotions of Gangubai Kathiawadi, Alia, in an interview, opened up on her equation with Ranbir as she said, “I’m already married to Ranbir Kapoor in my head. And, I think I’ve been married to him in my head for a long time (laughs)… I feel like the timing of even when we get married, it’s all going to work out in all the right and beautiful way.”

Ranbir: I have a boy crush on her now

Alia has openly spoken about being infatuation with Ranbir even as a little girl. Reacting to her statement, the 39-year-old actor during a press conference in Delhi, said, “Well, I have a boy crush on her now.” Filmmaker Karan Johar, who was also present at the event, had an ‘aww’ reaction to his reply.

Alia: He’s not a gossiper, he’s doesn’t gossip at all

Ranbir’s friends and peers in the film industry have referred to as a ‘gossip girl’ in jest. However, Alia, during a chat with RJ Siddharth Kanan a while back, said he is a non-gossiper and that he likes to speak only good things about others and that’s what she loves the most about him: “And he’s got a bad reputation that he is one big gossiper, he’s not a gossiper, he’s doesn’t gossip at all.”

Alia: He really inspires me to be a better version of myself at work

Not just personally, Alia continues to be inspired by Ranbir’s professionalism too. In an interview in 2019, the 29-year-old actor opened up on working with him on Brahmastra. “It’s so nice to just see him be. He really inspires me to be a better version of myself at work. His work ethics are commendable and I’m still learning from him. I’ll continue learning from him,” she shared.

Alia: I am very happy and deeply in love with Ranbir

As Gangubai Kathiwadi was all set to be screened at the Berlin Film Festival’s Berlinale Special Gala section, Alia in a chat spoke about her relationship with Ranbir and how it brings her a sense of comfort: “He is somebody I deeply love and look up to and feel very comfortable with. That’s the point of us dating for so many years. I am too comfortable to not talk about it.”

Ranbir: It needs time to breathe and it needs space

During the early months of their relationship, Ranbir spoke about his equation with Alia in 2018, thus cementing the news about their brewing romance. “It’s really new right now, and I don’t want to overspeak. It needs time to breathe and it needs space… When I see her work, when I see her act, even in life, what she gives is something that I’m aspiring to for myself. It’s new for us, so let it cook a bit,” he shared.

In an interview back in 2019, Alia talked about sharing a bond with Ranbir when asked if it was any different from her previous relationships. “It’s not a relationship. It’s a friendship. I’m saying this with all genuineness and honesty. It’s beautiful. I’m walking on stars and clouds right now… It’s not a situation where you’ll see us constantly together. That’s the true mark of a comfortable relationship. Nazar na lage,” she said.

Alia: In our relationship, Ranbir’s the cat, I am the dog

In a recent interview, Alia spoke about the different personalities they have. “In our relationship, he’s the cat, I am the dog. Now you go figure. Sometimes I wake up in the morning with so much energy and Ranbir is like ‘Easy, easy, calm down, breathe.’ If there’s been an exciting day, he’s the one I’ll start re-enacting it to,” she said, adding, “He is way calmer than I am, so I rely a lot on him to pass on some of that calmness.”