There are lots of delicious Indian dishes but some of them are not good for you. Here are 10 unhealthy Indian foods to be wary of.

This can take a toll on digestion and result in health problems.

Indian cuisine is much loved across the world, however, it is home to some unhealthy Indian foods.

This is due to the way many dishes are prepared and served.

Many dishes are cooked with lots of oil and ghee. While this adds flavor to the dish, it is incredibly fattening.

Indian food, especially curries, tends to be cooked with cream and butter at times, upping the fat content even more.

They are then served with accompaniments such as roti and rice which are high in carbohydrates.

For some, this means potentially over a thousand calories are consumed in just one meal.

Not only can it lead to weight gain but this also can result in health risks such as heart disease, diabetes and other vascular diseases.

When leading a healthy lifestyle, here are 10 unhealthy Indian foods you should avoid eating. 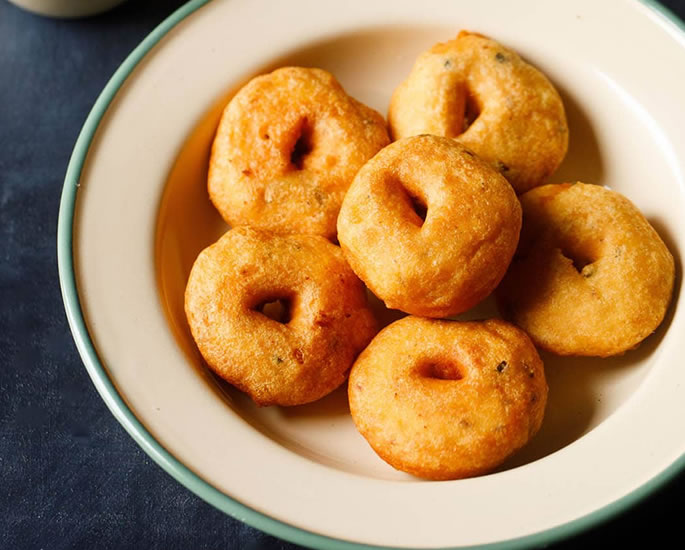 Medu vada is a South Indian staple and it is thought of as healthy as it contains daal.

But contrary to popular belief, medu vada is unhealthy because the black gram lentils used to prepare this dish are difficult to break down and digest.

This can take a toll on digestion and result in health problems.

This is a dish to avoid in the morning as your body needs something easy to digest as it has been empty the whole night.

It is also fried, adding to its unhealthiness.

In terms of calories, one serving of medu vada contains 334 calories. 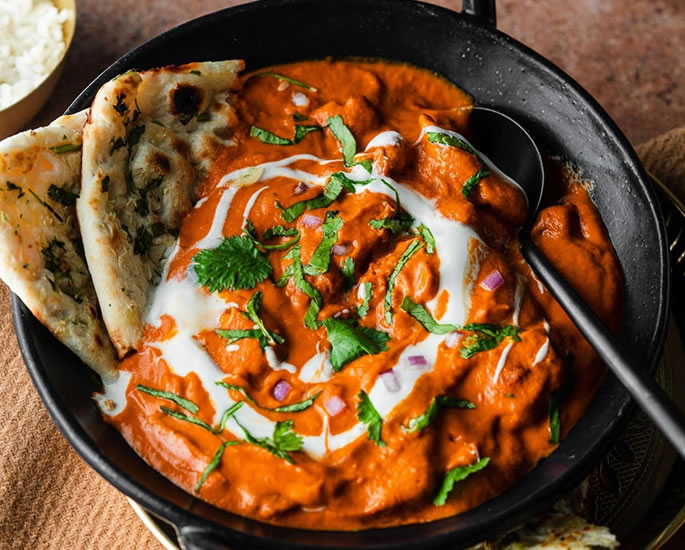 One of the most famous Indian dishes is butter chicken, however, it is also one of the unhealthiest.

This is mainly down to the fact that it contains lots of butter and cream, which are both high in fat.

The chicken is traditionally cooked over charcoal and at the same time, it is basted with butter and oil to keep the meat moist.

This adds to the calories as does the sauce, which is packed with butter.

In many restaurants, a teaspoon or two of sugar is added to balance out the sauce’s tanginess, and we are aware that refined sugar can be extremely unhealthy.

Butter chicken is also topped with cream and when served with butter naan, you are looking at nearly 1,300 calories in just one meal. 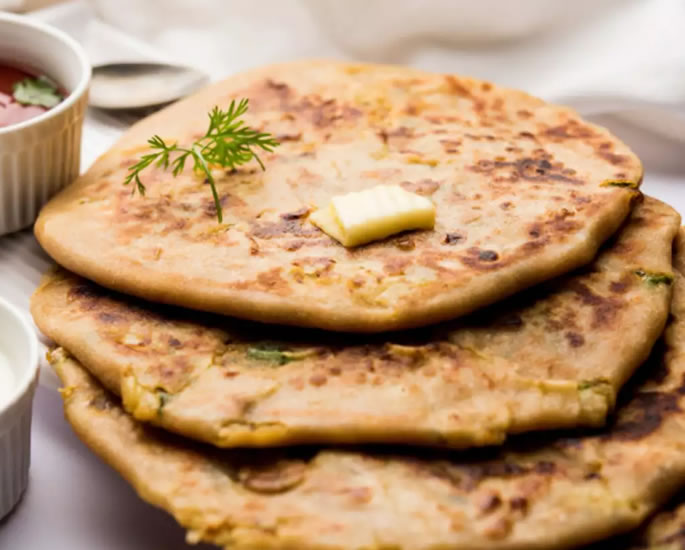 Another unhealthy Indian dish you may consider avoiding is Paratha.

This common Indian food is popular all over the country and while they are fine by themselves but they are usually eaten with butter and pickle, making them unhealthy.

Paratha is also usually made with potatoes, which is a carbohydrate and will increase the number of calories.

It is also fried, an unhealthy cooking method.

One paratha per meal is approximately 300 calories and this is a lot, especially if you are looking to lose weight.

To make this dish healthier, swap wheat flour for something like ragi flour.

Also, add other vegetables such as onions, peppers and crushed peas to the filling instead of just potato. Not only will it make your paratha tastier but it is also healthier. 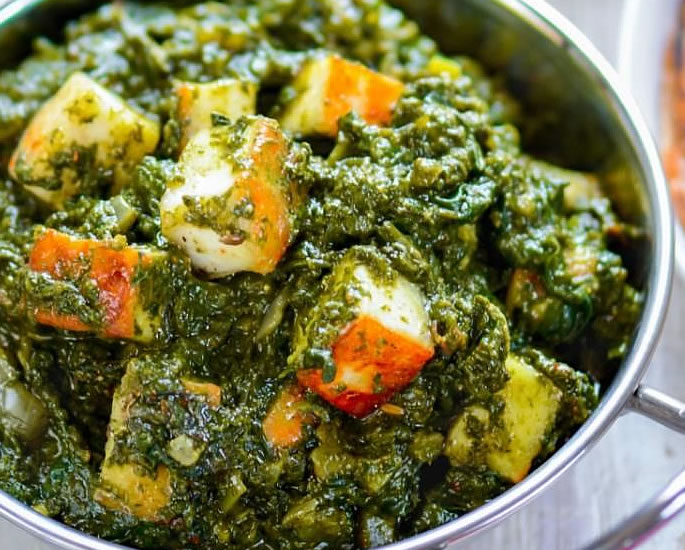 Saag paneer is a popular dish made with leafy green vegetables like spinach mixed with paneer.

But this is an unhealthy Indian dish due to the cubes of paneer, which have a high-fat content.

Some increase the fat levels by frying the dish in ghee.

The addition of cream and yoghurt may give saag paneer a velvety texture but it makes it a calorie and carb-heavy dish.

One cup of traditional saag paneer contains approximately 270 calories and 27 grams of carbohydrates.

Thankfully, swapping paneer for tofu is just one of several ways to create a healthier alternative. 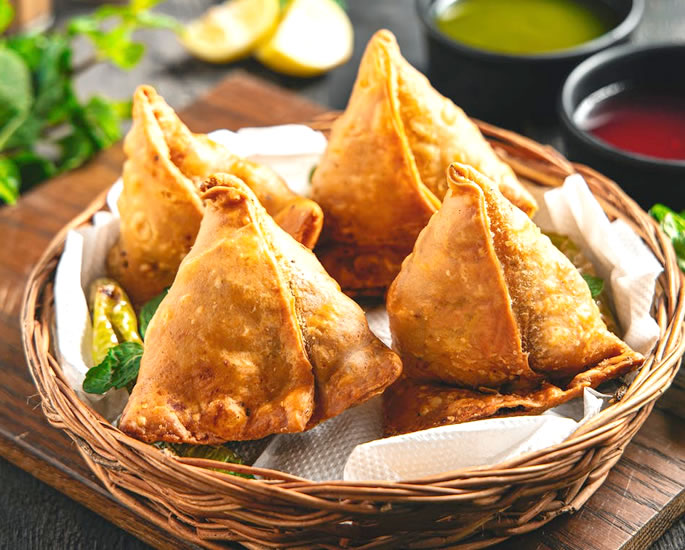 It is full of calories and while samosas taste wonderful, they add a lot of fat and carbohydrates and little nutritional value to your meal.

Its small size means it is likely that you won’t stop at one and this results in the calories piling up.

Pair this snack with a dipping sauce like raita and that is hundreds of calories eaten even before the main meal.

And when you take into account that samosas are typically deep-fried, it makes for delicious but unhealthy Indian food. 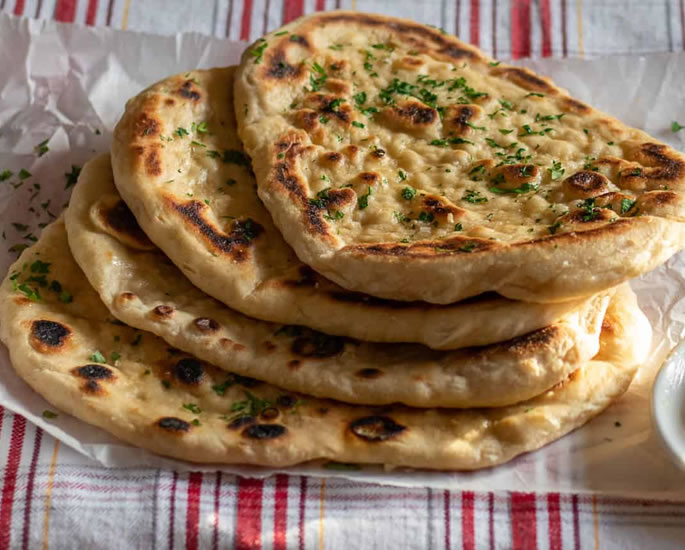 An authentic garlic naan is one of the tastiest accompaniments to your Indian meal.

However, it is not the best Indian food to have as it is full of calories. One garlic naan contains 385 calories and 65g of carbohydrates.

It is best to avoid eating garlic naan if you are watching your weight or on a low-carb diet.

Instead, opt for plain naan bread. It is still delicious and far lower in calories, containing 260 calories and 42g of carbohydrates. 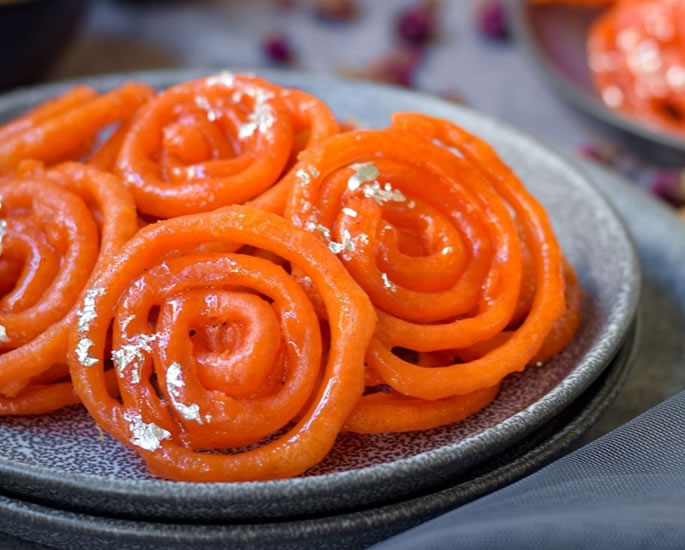 This delectable Indian dish is one of the most fattening foods as it is basically a deep-fried funnel cake soaked in syrup.

It is made with refined white flour which contains almost no natural minerals and vitamins. In fact, it contains simple sugars which spike blood sugar levels that lead to obesity and diabetes, heart-related problems, high cholesterol levels and high blood pressure levels.

Jalebi is also high in sugars, mainly due to the syrup it is soaked in.

“Jalebi is very unhealthy by eating just by itself.”

“But, it is often served with an accompaniment or in a combination with another sweet, which can make it much worse.”

It is a dish you should avoid as it is full of unhealthy ingredients and can cause fat-promoting diseases. 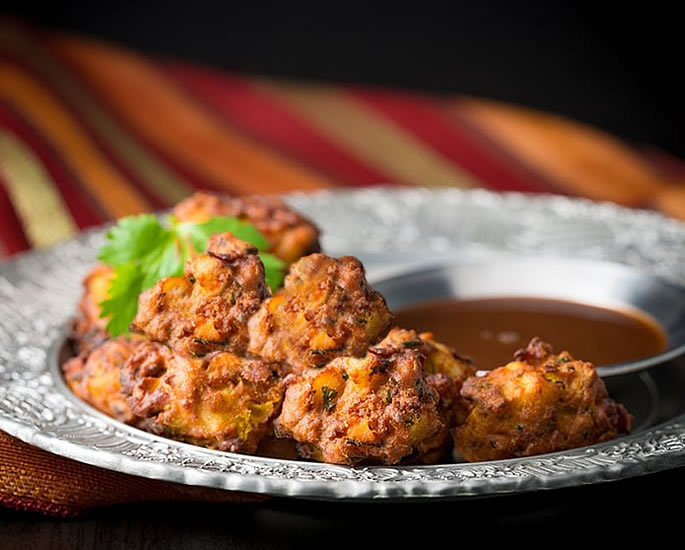 Another popular Indian snack that is also unhealthy is pakora.

Typically enjoyed as a starter, pakoras have the potential to add thousands of calories to your intake before the main meal.

Pakoras are usually made from vegetables, paneer or chicken. They are then coated in a gram flour batter and deep-fried.

According to calorie, one pakora is approximately 300 calories.

It is also cooked in lots of oil, which can lead to an increase in blood pressure and cholesterol, making you vulnerable to cardiovascular diseases.

A healthier alternative is to bake or air fry pakora, which will dramatically reduce the number of calories you are consuming. 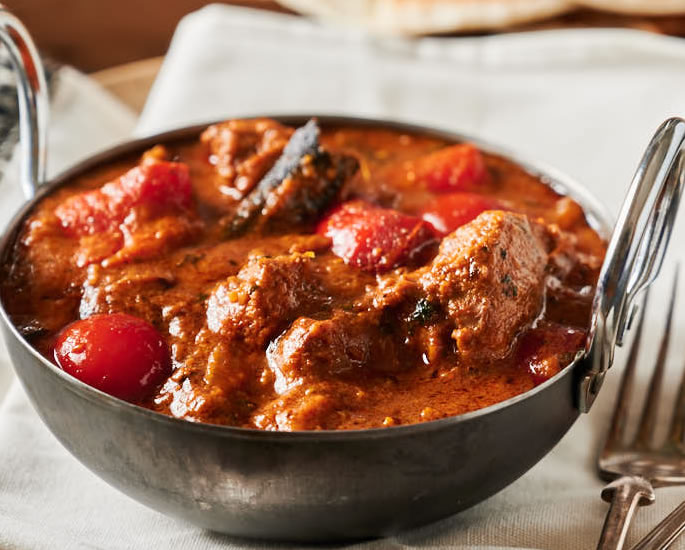 When it comes to lamb rogan josh, this dish is best avoided when in an Indian restaurant. This is due to the unhealthy way the dish is prepared.

Eating large quantities of red meat can raise the risk of coronary heart disease and according to the journal obesity, a survey revealed that restaurant portions are up to four times larger than recommended serving sizes.

Extra salt and fat are added for more flavour but are not nutritionally beneficial.

The cut of lamb is also a factor as it can have anywhere from 15 to 25 grams of fat in an 85g portion.

This results in a huge number of calories consumed and potential health risks in the future.

For a healthier version, simply make this dish at home as you control what cut of lamb is used and can trim excess fat. 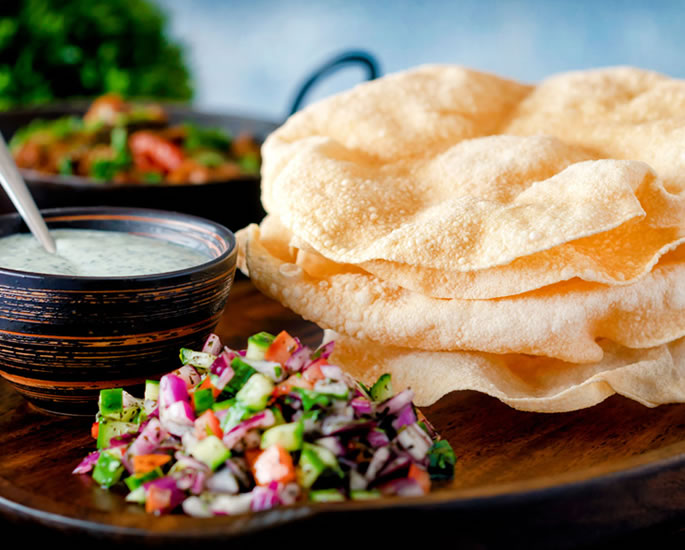 Poppadoms are a delicious snack to enjoy alongside your meal.

But while they are flame-roasted in Northern India, they are deep-fried everywhere else, making poppadoms an unhealthy Indian food.

One poppadom is 65 calories which may not sound like a lot but given that it is unlikely you will stick to just one, the calories will add up.

And when you factor in accompaniments such as chutney and even cheese, you will understand why it is a good idea to say no to this Indian snack.

Due to the ingredients used and cooking preparations, these 10 Indian foods are high in fat and carbohydrates which in turn, makes them high in calories.

Sugary Indian foods and those with a high carbohydrate content are to be avoided to improve your health.

However, some of these dishes are allowed on certain diets such as keto, where for example, saag paneer is low in carbs on its own, if not eaten with traditional roti, rice or naan.

Therefore, ways to make these dishes healthier can be achieved by swapping some ingredients with alternative .