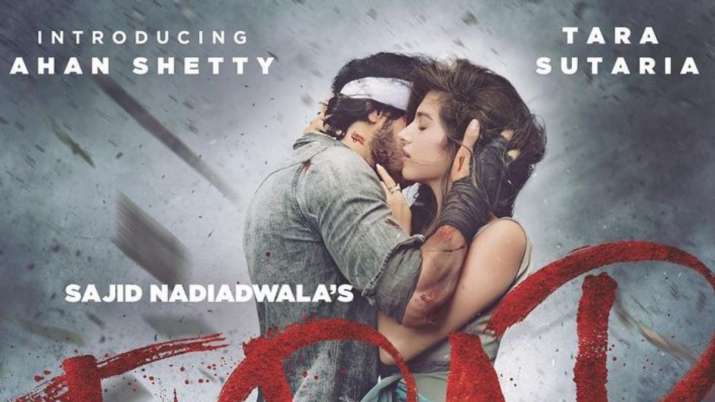 The upcoming film ‘Tadap’ starring Ahan Shetty and Tara Sutaria has got everybody excited with its just launched trailer. The sparkling chemistry between the lead actors has set the screen on fire. The trailer of Tadap was released by the makers amidst heightened anticipation after they gave a glimpse of their characters via two separate teasers on Tuesday. While Ahan’s character seems to be more raw and aggressive, Tara’s role appears to be gentle and calmer. With subtle narration, the trailer builds more intrigue and mystery around them.

Megastar  Amitabh shared the trailer video of Ahan and Tara on his Twitter account writing, “Ahan .. we saw you grow up .. and today its a huge pleasure and honour to introduce you to the World of cinema, through your maiden effort ‘Tadap’ .. all the blessings and good wishes ..

Raw, intense, passionate and musically uplifting, the trailer of the film gives audiences a glimpse of the intriguing ride in store. Directed by Milan Luthria, the romantic action drama oozes with electric chemistry between the young Gen Z stars. ‘Tadap’ is written by Rajat Arora. While Ahan takes on a challenging role in his very first film, Tara steps into the shoes of an unconventional character that shows us a different side of her. More strikingly is Pritam’s signature music.

The first teaser introduced the character of ‘Ishana’ essayed by Ahan as he stands with a chiselled body and his back facing the camera. The teaser has been strung together with an industrial dubstep track to give a grungy feel to the character. The second teaser, released moments after the first, introduces Tara’s character of ‘Ramisa’. Ramisa’s teaser is rounded up by a soul-stirring flamenco track hinting that the character with softer shades.

‘Tadap’ is an official Hindi remake of the Telugu blockbuster ‘RX 100’ and will be the first big canvas romantic drama to be released in theatres. The film is helmed by Milan Luthria who is known for films like ‘Taxi No. 9-2-11’ and ‘Once Upon a Time in Mumbaai’.

Presented and co-produced by Fox Star Studios, Nadiadwala Grandson Entertainment production ‘Tadap’ is set to roll out in cinemas on December 3.