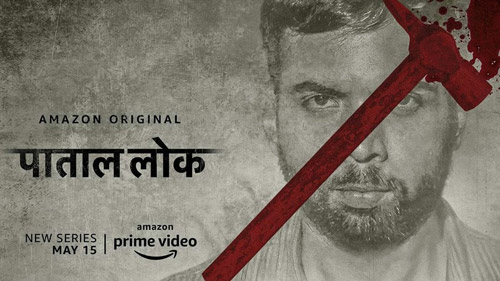 Amazon Prime Video’s recent announcement of its upcoming original series titled Paatal Lok has been quite exciting for many. The makers had previously released a teaser followed by a motion poster of another character, Hathiram Chaudhary played by Jaideep Ahlawat. Keeping up the excitement with the unveils, the character poster of another striking character- Vishal Tyagi aka Hathoda Tyagi is finally out and it’s really intriguing.

Vishal Tyagi popularly known as Hathoda Tyagi is volatile, ruthless and a serial killer. The character is played by yet another critically acclaimed actor Abhishek Banerjee. The performance is all set to redefine wickedness and give you goosebumps and fill you in with terror. Watch him on May 15, 2020 unleash his terror.

Paatal Lok is by the creator Sudip Sharma (the writer for Udta Punjab, NH10). Get all set to walk through virtual gates of purgatory. The official trailer of the show will be released on 5th May, 11:34am.

Paatal Lok will join the thousands of TV shows and movies from Hollywood and Bollywood in the stack of the Prime Video Catalogue including the Indian produced Amazon Original Series.