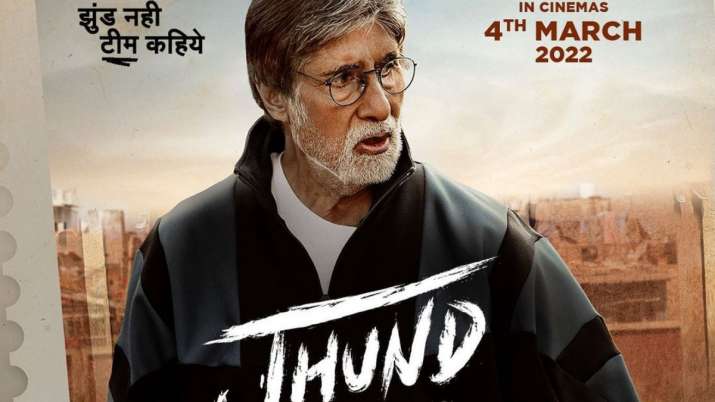 He also shared a new poster of the film, wherein he’s seen holding a ball in his hand. ‘Jhund nahi, team kahiye’ is written as the tagline on the poster. Take a look:

Big B essays a role based on Slum Soccer founder Vijay Barse in the upcoming sports drama. The film narrates the story of a professor who encourages street children to build a football team, in order to help them find a purpose in life. “Jhund” was first announced to open in cinemas in 2020 and then later in June 2021, but was pushed both the times due to the COVID-19 pandemic.

Not just ‘Jhund’, but Big B has an interesting and diverse lineup of films ahead. He will next be seen in Ayan Mukherjee’s ambitious project ‘Brahmastra’ which has been in the making for over 6 years. It has an ensemble cast of Ranbir Kapoor, Ali Bhatt, Mouni Roy and Nagarjuna Akkineni, besides Big B and will release theatrically on September 9, 2022 in five languages – Hindi, Tamil, Telugu, Malayalam and Kannada.

He also has ‘Uunchai’, ‘Mayday’, ‘Good Bye’ and the Hindi remake of Hollywood film ‘The Intern’.