Angrezi Medium Review: Irrfan Khan is the life of this father-daughter saga! 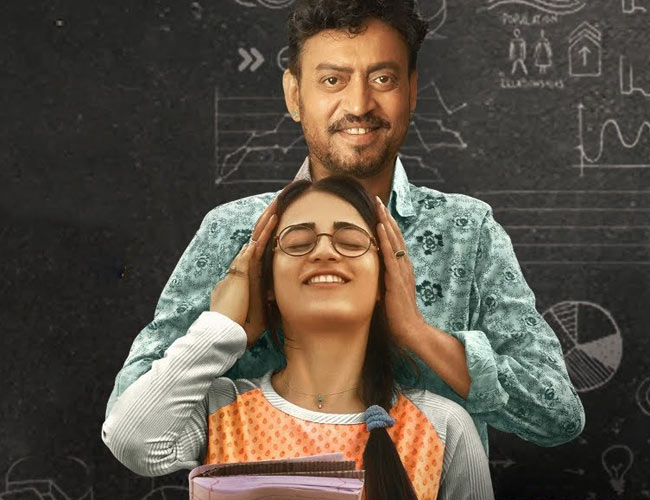 Angrezi Medium Review: Irrfan Khan is the life of this father-daughter saga!

Homi Adajania knows how to depict a loving father-daughter relationship. With stellar performances by the lead actors, perfect comic timing and just enough emotion to make your heart go out to the protagonist. But the overall plot gets too convoluted, and it leaves you wondering that probably several plot cliches were avoidable, and the story still could have been told in a beautiful manner.

The film opens in Udaipur. Champak Bansal (Irrfan Khan) is a confectioner and runs his family inherited sweetmeat shop ‘Ghasite Ram’s’, and his daughter Tarika (Radhika Madan) has long harboured the dream of going abroad for higher education. She sees her chance when her school announces a partnership with London’s Truford University, but only the top three students are eligible. With months of burning the midnight oil, she finally makes the cut. But her father inadvertently manages to antagonise the Principal (Meghna Malik) and she tears Tarika’s approval letter to pieces. Champak swears that he will fulfil his daughter’s dream of studying in London come hell or high water.

Homi Adajania knows his way around depicting a good father-daughter relationship. He knows how to present a supportive father to a persevering daughter. Although Champak fails initially to secure Tarika’s admission through the school’s partnership and later through the foreign student quota, he decides on securing British citizenship and lands in London to procure it. If only if were that easy, right?

The direction and screenplay are bang on. The comic moments would leave you in splits. The director doesn’t make you feel like you’re in the middle of a melodrama but adds just enough emotion to tug at your heartstrings. There are moments where you would actually find yourself laughing with tears in your eyes. We have to hand it to the actors for the director couldn’t have pulled it off successfully without them. The film only falls short when they make the plot too convoluted after arriving in London.

It is after landing in London airport, that the series of cliches pick up. The sniffer dogs sniff out pickle jars from their luggage, the miscommunication with the London authorities over language barriers, deportation, and finally being blacklisted from England. What follows is a series of illegal moves to get back into the country, which after a certain point gets painful to watch.

Irrfan is obviously impeccable as always. He is a loving, supportive, well-meaning but half-witted father. Radhika does justice to the young and ambitious Tarika. She is anxious to see the world and carve a niche for herself. Deepak Dobriyal and Dimple Kapadia are magnificent in their roles respectively. Kareena Kapoor Khan only joins after the intermission but her cop character, Naina Kohli, and her estranged mother (Dimple Kapadia) add perfectly to portray the misunderstandings between young adults and parents. Pankaj Tripathi is very conspicuous with his short but strong cameo.

The film has done an amazing job at the juxtaposition of the two cultures. Tarika wants to get independent and gets a part-time job to pay for her rent and tuition, thinking that it would lessen her father’s burden. But Champak doesn’t understand why his daughter feels the need to ‘pay him back’ for the fees. Tarika too gets engrossed in London University life. She forgets the great lengths her father has gone to, to ensure her dreams are fulfilled and starts behaving like a brat. She is out partying, getting a part-time job and trying to get a white guy to notice her- all before University actually began. But Champak has resounding advice for his young daughter that stays with you even after the film has ended- freedom comes at a cost.

The film’s soundtrack commensurates with the events. Sachin-Jigar and Tanishk Bagchi have done a great job. The songs are minimal and you don’t have to endure too many out of place songs.

All in all, the film is a brilliant portrayal of a loving father going to great lengths to fulfill his daughter’s dreams. It is a juxtaposition of the two cultures and the emotional turmoils young adults often go through with their parents with just the right dosage of comic relief. Need I say more?