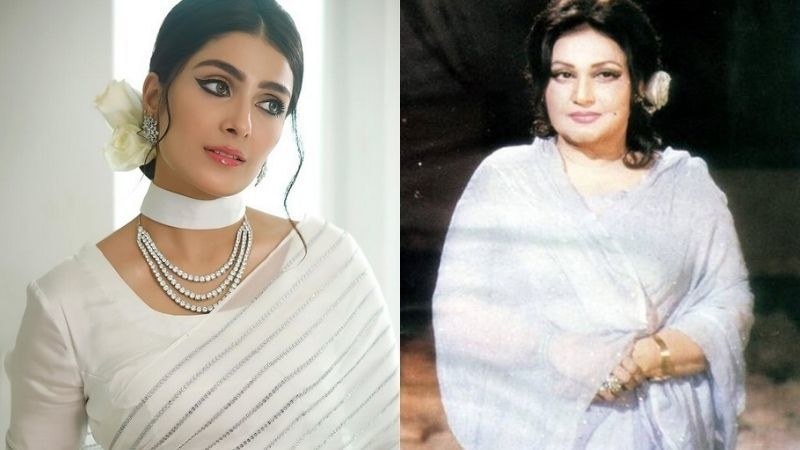 The actor posted pictures on Instagram of herself recreating the legendary singer’s signature look.

Ayeza Khan, who starred as the much loved Meenu in Chupke Chupke, recently posted photos of herself dressed like legendary singer Madam Noor Jehan on Instagram and we can’t get over how similar they look.

With a 9.4 million followers on Instagram, Ayeza is one of the most followed Pakistani celebrities on the app and regularly posts updates on her account.

“The moment I saw myself in the mirror in this look, I had goosebumps,” the actor wrote.

“It was absolutely unbelievable. Of course never in a million years could I come close to a legacy like hers, but to feel a little part of Madam Noor Jehan in me, in this moment, I got so hysterical. My idol, forever.”

Ayeza is no stranger to uplifting other women. Recently, she posted about Mahira Khan and gushed over her friend.

Noor Jehan’s daughter Nazia Ejaz as well as her granddaughter Natasha Ali Lakhani commented underneath Ayeza’s posts, both of whom showed a whole lot of love for her look.

Celebrities such as Mahira, Maya Ali and Sunita Marshall also couldn’t help but gush over the actor’s transformation in the comment section.

Ayeza isn’t the only one who has recreated Noor Jehan’s look. Lakhani is a makeup artist herself and has taken to social media in the past to recreate her grandmother’s makeup and hairdo.

Geeti, as mentioned in Ayeza’s post, is the character she will be playing in the upcoming TV serial Laapata, which is set to air on Hum TV soon. The teasers for the production have been released and fans are eagerly awaiting seeing its star-studded cast in action, which includes Sarah Khan, Gohar Rasheed and Ali Rehman Khan.

The much awaited serial has been produced by Momina Duraid Productions and is written by Khizer Idrees.