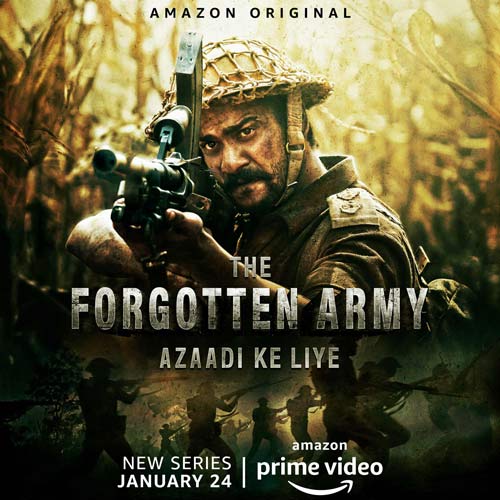 Created and Directed by National Award-winning filmmaker Kabir Khan, The Forgotten Army-Azaadi Ke Liye, will launch across 200 countries and territories on January 24, 2020

Based on true events, The Amazon Original Series traces the story of the brave soldiers from the Indian National Army (INA) who marched towards the capital, with the war cry ‘Challo Dilli’, to win back their country from the British

Amazon Prime Video today announced the trailer launch of its first Indian Original releasing in 2020 – the highly anticipated Amazon Original Series The Forgotten Army- Azaadi Ke Liye. Created and Directed by the national award winning filmmaker, Kabir Khan, the war epic is based on true events and narrates the journey of the extraordinary young brave men and women who formed a part of the Indian National Army (INA) and fought against the British for India’s Independence.

The series marks the digital debut of Sunny Kaushal and the acting debut of Sharvari in lead roles, alongside Rohit Choudhary, Karanvir Malhotra, M.K Raina, TJ Bhanu and Shruti Seth. The Forgotten Army- Azaadi Ke Liye is set to release across 200 countries and territories on January 24, 2020, exclusively on Amazon Prime Video.

Vijay Subramaniam, Director and Head, Content, Amazon Prime Video India, said `We have had a great run in 2019 and are delighted to open the new year with one of our biggest shows till date. The Forgotten Army – Azaadi Ke Liye, is a story close to our hearts and one that Kabir has wanted to make for over 20 years. It is the ultimate example of the engaging content we want to continue to create in India for Prime Video – compelling stories with world class production values. We’re extremely proud to bring this show to our audiences and fittingly, on this Republic Day weekend. We are sure they will enjoy watching it.`

Creator and Director, Kabir Khan said, `Being the first script I’ve ever written, The Forgotten Army – Azaadi Ke Liye is a project I am very passionate about. It is a tale that is larger than life and bringing it to screen would not have been possible without the support and trust exhibited by Amazon Prime Video. The journey of these soldiers of the INA is a story that needs to be told and it has taken several years of extensive research to gather fragmented memories of these incredibly brave men and women who fought so selflessly for India’s independence. The reaction to the teaser alone has been overwhelming and I hope the audience gives the same kind of love to the show as well. This project has been a labour of love – from custom creating hundreds of bicycles from the 1940s, to recreating the Singapore of that era, to finding just the right cast to give life to these characters, our only effort has been to truly represent the journey of these fiercely brave men and women to whom we owe our freedom.`

Actor, Sunny Kaushal said `The Forgotten Army is a compelling story of courageous young men and women who were an integral part of our freedom struggle. Marking my digital debut by playing a character of such bravery and valour has been a true privilege and an absolute honour. The brilliantly made series that is helmed by Kabir sir (Kabir Khan) and will be showcased on Amazon Prime Video is nothing short of phenomenal. I am sure The Forgotten Army will be loved by a wide spectrum of audiences – young and old alike.`

Actress, Sharvari said `I am fortunate to be making my acting debut in a Kabir Khan directorial. It is a dream come true for me to have got an opportunity to learn from a visionary film-maker like Kabir sir. I’m grateful to him for believing in me and letting me express myself as an artist in his vision. The Forgotten Army is the untold story of the forgotten young women and men who laid down their lives to ensure we live in a free India and their story needed to be told. The fact that it is releasing on a global platform like Amazon Prime Video will mean that this important chapter of India’s freedom struggle will reach audiences across the world.`