Bamfaad Review: Yet another love story with an impressive explosion 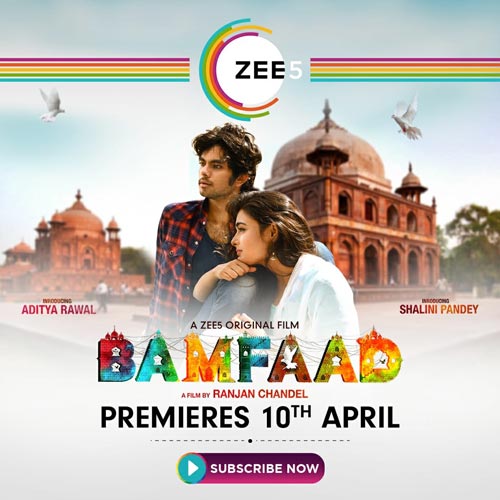 Bamfaad, a trio of Bollywood first-timers – director Ranjan Chandel, lead actor Aditya Rawal (Paresh Rawal’s son) and female lead Shalini Pandey joins hands to create an inter-religious hinterland story of doomed love that to duck and weave its way in and out of the cliches of the genre.

The movie begins with college view, where students are giving exams including Nasir (Aditya Rawal) the main lead who is cheating to pass the exams but then got caught by college officials. It is established here that shown how sharp-minded and dominating he is when it comes to showing the power where he cancelled the exam and help his friend to impress a girl.

The film revolves around Naseer and Neelam (Shalini Pandey), the small-town underworld is controlled by two men – Nasir’s father Shahid Jamal (Vijay Kumar) and a mild-mannered gangster Jigar Fareedi (Vijay Varma). Both are politically ambitious and will do whatever it takes to stay in the good books of the local legislator. Set in Allahabad, Naseer is a rebel, falls for Neelam, a calm, composed and confident girl. The two fall in love with each other but Neelam’s secrets doom her present and future.

No, there is no Hindu-Muslim class divide but the same old star crossed lovers’ story between Nasir and Neelam that sets the tone of the film. Nasir loses his heart to Neelam who is tied to local mob boss Jigar in mysterious ways.

Bamfaad brings back memories of the small-town love story that Bollywood used to tell, and keeps us watching with a fluid flourish or two, the story brings some freshness with the great dialogues and it’s delivery by the characters. Ranjan Chandel did a great job with the direction.

Chandel has co-written this story, screenplay and dialogues with Hanzalah Shahid. The writing of the characters’ motivations and their relationships are full of depth and totally realistic. The chemistry between the lead characters is cute and unbelievable. The screenplay of the movie seems to be okay whereas the cinematography is somewhat good where we can see a few beautiful frames.

Paresh Rawal’s son Aditya who makes his debut is impressive in his first outing. He gets the tone of the character perfectly but its fresh, is that he isn’t a factory manufactured, abs installed, bulging muscled product. Rather he is relatable, a small framed, rugged boy next door.

Shalini Pandey in her debut Hindi film did a good job as she is playing the character of a cute, courageous and confident girl. But the one who wins your heart has to be Vijay Varma. You tell this man to be any character and he knows how to make it his own. The supporting cast like Jatin Sarna and Sanjeev Bhattacharya plays a massive contribution to keep things interesting.

The music of Bamfaad is average and could have been much better but the background score didn’t give any grip for the scenes. But at some points, it is pretty good and sometimes very low.

Politics, elections, betrayal of friendship and the loss of family are the multiple layers in Bamfaad and it can be watched for Aditya Rawal’s impressive debut. And if love, violence and drama float your boat. But if you do plan to give it a miss, you are missing to a good cinema.