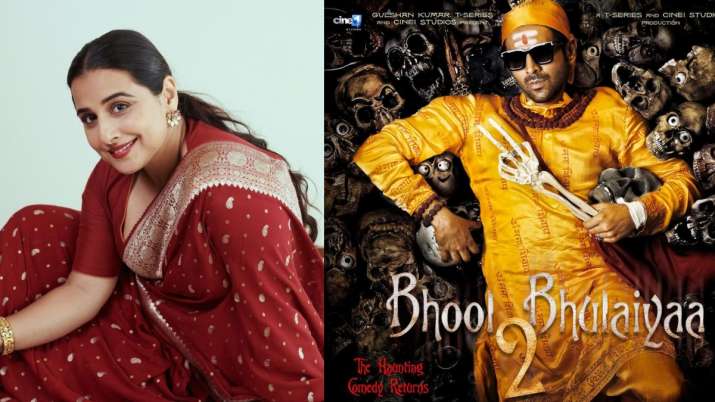 Of late, there have been reports circulating on the Internet claiming that Vidya Balan will be joining the cast of Bhool Bhulaiyaa 2. Clearing the air, the makers of the film refuted the rumours with a statement. “The recent rumours of Vidya Balan being part of Bhool Bhulaiyaa 2 are untrue. The lead starcast of the film includes Kartik Aaryan, Kiara Advani & Tabu,” the statement reads.

Kartik has kept fans intrigued about the film by often sharing updates about it. From posting BTS pictures to motion posters to giving fans a sneak peek of the film with his co-stars Tabu and Kiara, Kartik makes sure to keep the excitement level of fans at an all-time high.

Some time back, the actor treated his fans with a BTS picture of Bhool Bhulaiyaa 2 on Instagram. The photograph features him posing alongside Tabu. It was clicked when the actors had resumed shooting for the film after a break from the COVID surge. “Begin Again #BhoolBhulaiyaa2,” he wrote as the caption.

Likewise, on Halloween, he tickled the audience’s funny bone with his humorous posts from the film. Kartik poked fun at his co-star Kiara Advani. He took to Instagram and shared a picture where he can be seen sitting next to an old man whom the actor referred to as Kiara, in jest. The actor captioned the picture, “@kiaraaliaadvani in her Halloween outfit. What a dedicated actor ??”

Kiara too shared Kartik’s image in her story as she wrote, “Hahahaha why have you revealed my look from the film.”

On another occasion, actor Kartik Aaryan updated fans about shooting one of the most challenging sequences for his upcoming film. He shared a monochrome picture of the film’s clapboard on Instagram and revealed that it was the climax scene for the film. Alongside the image, he wrote: “Shot 162 One of the most challenging sequences I have shot for gets done !! #BhoolBhulaiyaa2 Climax. Whole week everyones been at it and great team effort!”

Apart from this, the actor will be seen in multiple big-ticket films like ‘Freddy’, ‘Captain India’, ‘Shehzada’ and Sajid Nadiadwala’s untitled next.