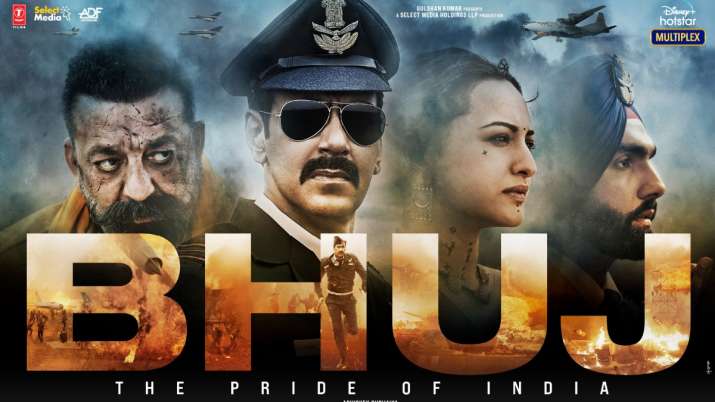 The Ajay Devgn-starrer war action film “Bhuj: The Pride Of India” will release digitally on August 13, ahead of Independence Day. Surprising his fans, Ajay Devgn shared the second trailer of the film on Instagram. The video gives his fans yet another glimpse of the Bhuj war as he celebrates the valour of the unsung heroes. In the trailer, he’s seen in a wartorn zone with blazing arsenals.

“Bhuj: The Pride of India – Official Trailer 2. In the face of insurmountable odds, our heroes led us to victory. Witness the rise of our unsung heroes in #BhujThePrideOfIndia, releasing on 13th August only on @disneyplushotstarvip,” the actor captioned the video.

Sometime back, the makers of Bhuj: The Pride of India’ released the film’s new song ‘Zaalima Cocoa Cola’ featuring the Moroccan actress Nora Fatehi as Heena Rehman, ‘Zaalima Cocoa Cola’. The song is set in the social and political premise of Indo-Pakistan war in 1971, showcasing the actress in a rustic avatar. Slipping into the character of a spy, Nora Fatehi shared the video on her verified Instagram account. Take a look:

“Bhuj: The Pride Of India” has been written by Abhishek Dudhaiya, Raman Kumar, Ritesh Shah, and Pooja Bhavoria and is all set to release on August 13 on Disney+ Hotstar.

Apart from Bhuj: The Pride of India, Ajay Devgn has a busy slate ahead. His upcoming projects are sports drama “Maidaan”, SS Rajamouli “RRR” which also stars Ram Charan, Jr NTR and Alia  He is also set to appear in Rohit “Sooryavanshi”, reprising his role of the infamous cop Bajirao Singham. He will also be seen in Sanjay Leela Bhansali’s “Gangubai Kathiawadi”, headlined by Alia Bhatt.

In addition to these, he also had his directorial film “Mayday”.