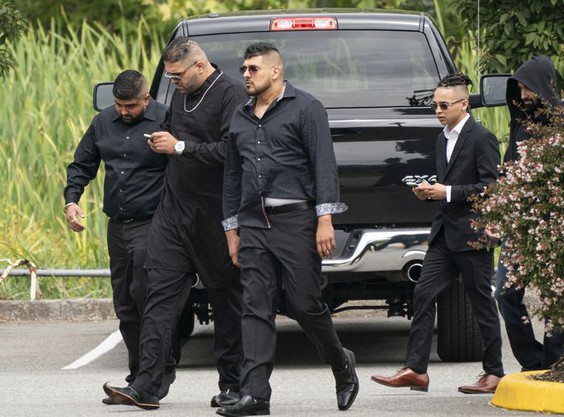 A targeted shooting on a popular Coal Harbour street left a Brothers Keepers gangster dead Saturday night, as his devastated brother looked on.

Harb Dhaliwal was shot at close range just after 8:30 p.m., right beside vehicles parked on the north side of the 1500-block of Coal Harbour Quay.

His elder brother Barinder “Shrek” Dhaliwal screamed out his name and had to be held back by Vancouver Police officers after the shooting.

Sources told Postmedia that the youngest brother Meninder was also nearby when the murder happened in a busy stretch of waterfront, packed with people enjoying the sunshine and dining on patios.

All three brothers, who grew up in Abbotsford, are linked to the Brothers Keepers gang.

A firearm with a suppressor could be seen on the sidewalk beside Dhaliwal’s body, which remained under a white tarp until early Sunday morning.

Vancouver Police Const. Tania Visintin didn’t release the murder victim’s name, but Postmedia confirmed it with several sources. And it was circulating in social media tributes.

She said “the victim was pronounced dead on scene after attempts of resuscitation failed by Vancouver Police, Vancouver Fire Rescue Service and B.C. Ambulance Service.”

“Preliminary evidence indicates the shooting was targeted and investigators do not believe there is a specific public safety risk at this time related to this incident,” she said.

But she acknowledged the trauma inflicted on people in the area at the time.

“Although this shooting was targeted, we are very concerned about the potential impact on the public of an incident like this,” Visintin said. “This happened in a busy spot on a nice evening and an innocent person could have gotten hurt.”

No one has been arrested yet, she said.

There is often a lot of noise on the waterfront, so at first she didn’t think anything of it. But then she went into the living room and looked down and saw the crime tape and police everywhere.

About two hours after the shooting, an officer asked a woman walking her dog if she had treats, explaining that officers were trying to get a dog out of a car.

People who had parked on Coal Harbour Quay while they walked along the waterfront or ate in the area had to wait for hours to get their vehicles out from behind the police tape.

Gang violence has been down in Vancouver so far this year, Visintin said.

Dhaliwal’s slaying is the fifth murder in the city in 2021.

She said the VPD’s gang crime unit works in the waterfront area and in other parts of downtown, looking for gang members.

“Our gang crime unit is always downtown of course … with the restaurants in our bar watch program,” she said. “We haven’t had too much activity in Vancouver this year.”

Visintin said because the murder was targeted, Vancouver homicide detectives will be working with the anti-gang Combined Forces Special Enforcement Unit.

“So we have a lot of investigational tactics on this,” she said.