Dazzling on the cover of a leading magazine, “There’s nothing Radhika Apte can’t do”. Don’t miss out! 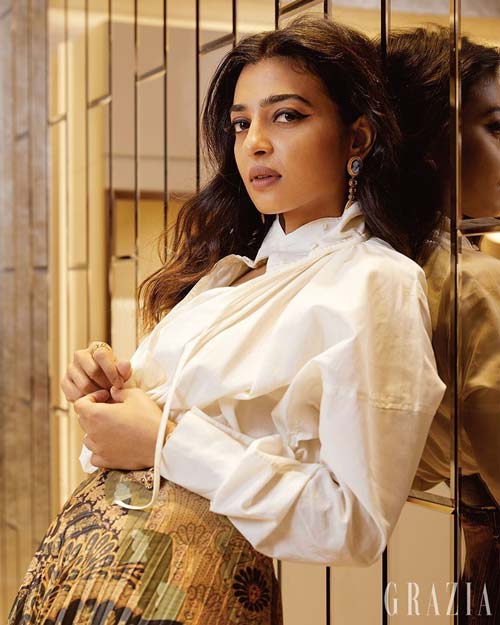 Dazzling on the cover of a leading magazine, “There’s nothing Radhika Apte can’t do”. Don’t miss out!

They say it and we truly believe it! Radhika Apte recently featured on the cover of a leading magazine, looking absolutely stunning in her edgy style and we are totally loving it! Hailed as the digital queen, the actress not only is ruling over the OTT space but also, theatre and Bollywood sphere, alike. the actress has carved a distinct space for herself with all the different and pathbreaking projects she has delivered.

Looking every bit gorgeous and upholding the very element of being an ‘Indie star’ yet again, the magazine’s social media handle explains it all and shares, `Now Streaming: There’s nothing @radhikaofficial can’t do. Theatre, OTT content and Bollywood feature films – you name it. Join us as we sneak a peek inside her creative genius.`

Sporting a super glamorous brown and mustard gradient velvety pantsuit with a crisp white shirt, teaming it up with chain-lock earrings and hair pulled back in a very stylish clip up- everything about the look is extremely glam and hot, at the same time.

Radhika is an actress who can accredit her fame to the different genre and choice of scripts that makes her the best Indie actress of Bollywood. With her omnipresence across the premium digital portals, Radhika Apte has made an irreplaceable place across platforms and is loved for her promising body of her work as well as her presence.

Last seen in Andhadhun, Radhika Apte will be next seen in the film ‘Raat Akeli Hai’ alongside Nawazuddin Siddiqui for which the actress has already finished the first schedule shoot in Lucknow. Radhika will also be seen essaying the role of a spy, in Apple Tv’s upcoming project titled ‘Shantaram’.