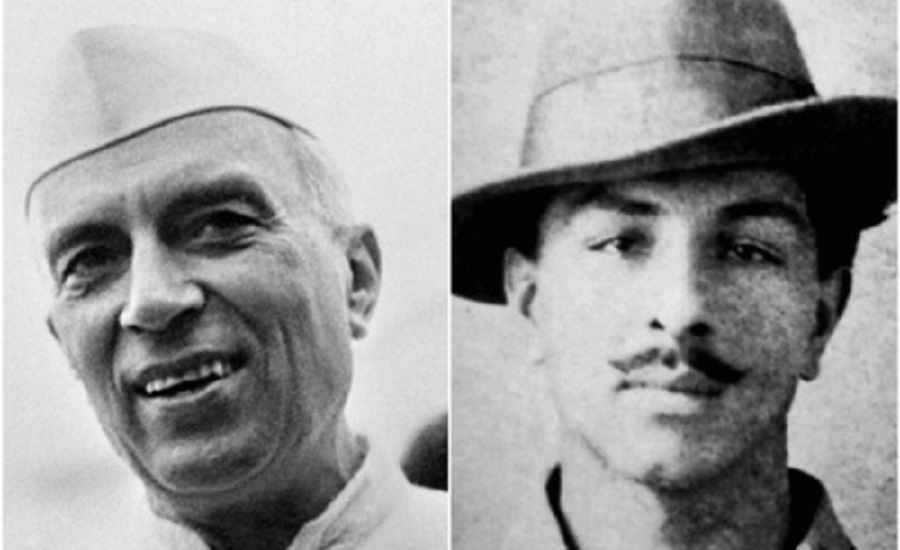 he article was first published in March 2018 and has been replugged for Bhagat Singh’s birth anniversary.

The reaction to the assassination was not what Bhagat Singh, Rajguru and Sukhdev had anticipated.

Rai had died exactly a month ago, a few days after he was thrashed by the colonial police led by Scott outside the Lahore Railway Station, where he was protesting against the Simon Commission. The British had set up the commission to report on the progress of constitutional reforms in India, but it was criticised for not including a single Indian member.

Rai had been a mentor to Bhagat Singh. He was a former ally of Ajit Singh, Bhagat Singh’s revolutionary uncle and role model. The young leader had also studied at Lahore’s National College, which Rai had established, and had imbibed revolutionary literature at the Dwarka Das Library that Rai had set up in the city.

A matter of principle

A committed communist, Bhagat Singh had ideological differences with Rai, who was regarded as a Hindu communalist. Besides being a member of the Congress, Rai was also part of the Arya Samaj, an organisation that had played an important role in the communalisation of national identity in India.

However, despite his differences with Rai, Bhagat Singh and his comrades felt it was essential to avenge the death of one of the leading politicians of the country. Rai was a former president of the Congress and he, along with Bal Gangadhar Tilak and Bipin Chandra Pal – known as the Lal-Bal-Pal trio – had been responsible for adding fervour to the Indian national struggle.

For Bhagat Singh, Rai’s death was a blow to the honour of the people of India. However, when the honour was avenged with the death of Saunders, it failed to inspire the revolutionary reaction Bhagat Singh had anticipated.

Many prominent leaders and politicians distanced themselves from what was described as a “terrorist” act, while numbers at the regular meetings of the Naujawan Bharat Sabha, the parent organisation of Bhagat Singh and his comrades, also dwindled. Even The People, a weekly newspaper Rai had founded in Lahore, called the assassination a desperate action.

Bhagat Singh and his comrades reasoned that a more courageous act was required to inspire the revolutionary spirit of the people – an act that would “Make the deaf hear.” Thus it was decided that a bomb would be thrown in the Legislative Assembly in Delhi, making sure no one was harmed in the process. But Bhagat Singh realised that even that might not achieve their objective.

He then suggested that the bombers court arrest thereafter. He argued that they would use their trial to educate the people about their revolutionary ideas, thus setting up the conditions for an eventual communist revolution in the country. However, the country’s leading politicians also condemned the bombing in the Legislative Assembly, much like they did with Saunders’ assassination.

Gandhi equated the bombing with the murder of the Hindu publisher Rajpal in Lahore for publishing a controversial pamphlet on the Prophet of Islam. Motilal Nehru declared that the choice for the people of India lay between Gandhi (the adherent of non-violence) and “Balraj”, a pseudonym used by Bhagat Singh for the assassination.

At this stage the young revolutionary leader was far from the hero he was to become shortly after.

The situation began to change dramatically during the record-breaking hunger strike that Bhagat Singh and his comrades undertook in jail to protest against the deplorable conditions there. Overnight, the public sentiment changed in their favour. Meetings arranged by the Naujawan Bharat Sabha and other organisations sympathetic to Bhagat Singh’s agenda began attracting thousands of people.

The zeal increased even further following the death of their comrade Jatin Das, who lost his life on the 63rd day of the hunger strike due to the damage to his lungs after being force-fed. The hunger strike touched the conscience of the people, making the nationalists household names. Many argue that around this time, Bhagat Singh began rivalling the popularity of Gandhi.

In the meantime, the Indian National Congress was also experiencing a transition. A new cadre of leadership, led by Jawaharlal Nehru and Subhas Chandra Bose, was emerging. They were both leftist in their ideology and critical of the existing leadership, which included Gandhi and Motilal Nehru.

At this point, the Congress was demanding Dominion Status from Britain, which would have allowed India autonomy within the monarchy, like Australia and Canada. To the younger leaders, this was a compromise. Jawaharlal Nehru particularly had serious reservations about it, but eventually accepted the idea after being persuaded by Gandhi.

However, the rise of Bhagat Singh’s popularity meant that the Congress started losing its influence over the youth, who were being increasingly drawn towards his political rhetoric. Jawaharlal Nehru was already sympathetic to the nationalist leader, whom he visited in jail. He also published the defence statement of Bhagat Singh and his comrades in the Congress bulletin, for which he was criticised by Gandhi.

The slogan of “Inquilab Zindabad” being used by Bhagat Singh and his comrades started replacing the slogan of “Vande Matram” popularised by the Congress. Towards the end of the 1920s, it became increasingly clear to the older leadership of the Congress that they would isolate their young followers if they did not accommodate their political agenda.

The rise of Jawaharlal Nehru

On September 28, 1929 much to the surprise of everyone, Nehru, backed by his father and Gandhi, was chosen as the new Congress president. This was to mark a shift in the Congress’ policies. A couple of months later, on New Year’s Eve, the tricolour flag of independent India was hoisted on the banks of the Ravi in Lahore, as the Congress changed its demand from Dominion Status to Purna Swaraj or complete independence.

Bhagat Singh’s popularity was at its peak in Punjab, with Lahore being his political home. He, Rajguru and Sukhdev were executed there on March 23, 1931, a little more than a year after the Congress called for Purna Swaraj. Their last rites were performed on the banks of Ravi by Bhagat Singh’s supporters who had snatched their remains from the colonial state.

It is impossible to predict how things would have turned out had Bhagat Singh’s rhetoric from jail not captured the imagination of the people. Would it have been possible for Jawaharlal Nehru to rise so quickly to the top in the Congress? Would the largest political organisation of the country have changed its demand from Dominion Status to Purna Swaraj so soon after first demanding Dominion Status?

There is, however, no doubting that Bhagat Singh’s popularity and rhetoric made it easier for Jawaharlal Nehru to convince the senior leadership of the Congress to revolutionise their agenda or risk losing their popular support to other more radical organisations.