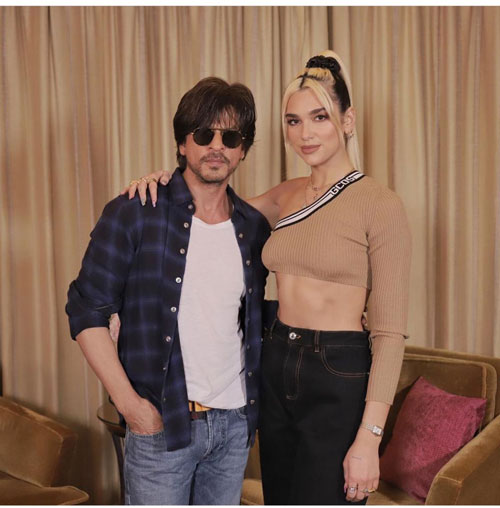 King Khan, as he is commendably referred to in the global arena, interacted with the 2-time Grammy Award and 3-time BRIT Award-winner and Britsh-Kosovan superstar Dua Lipa, who arrived in the city earlier this morning for her first-ever live concert at OnePlus Music Festival in India.

Ahead of her headlining performance in Mumbai, Dua Lipa, one of the most streamed female artists in the world met with one of the most recognized and loved Indian film personalities worldwide, Shah Rukh Khan.

Dua Lipa is a hit with Shah Rukh Khan’s children, and he jokes that he wanted to get acquainted with her to find out who he is competing with for their love.

In the past, Shah Rukh Khan has successfully collaborated with applauded international artists such as Marshmello, Diplo, Akon and has also interacted with Chris Martin’s Coldplay, DJ Snake, and lady Gaga during their respective India visits. Notably, his recent appearance on the talk show host David Letterman’s `My Guest Needs No Introduction` which has also featured Jay Z, George Clooney, former US President Barack Obama, and Nobel laureate Malala Yousafzai received its’ highest IMDB rating of 9.3 superseding the ratings of earlier episodes.

Considered to be a household name in India and worldwide alike, today his universal appeal and stardom transcend beyond cinema as he has firmly established himself as a producer, orator, philanthropist, and entrepreneur, amongst a global fan footprint that runs 3.5 billion people deep. Shah Rukh Khan who is widely loved for his deeply engaging conversations spruced with his trademark charm and wit has graced global platforms ranging from Ted Talks to The World Economic Forum to Yale University and is the only Indian actor who has been awarded five doctorates from universities across the globe.

Since arriving in style in 2015 Dua’s debut album has eclipsed4 million sales worldwide and spawned 40 million single sales. It is officially the most-streamed album by a female artist in Spotify history. She is also the youngest female solo artist ever to hit 1 billion views on YouTube for the video for`New Rules`, her # 1 anthem for female empowerment in 2017. Dua has also won 3BRITS for British Female Artist, British Breakthrough Artist in 2018 and BestBritish Single for `One Kiss` with Calvin Harris in 2019, along with 2 Grammys for Best New Artist and Best Dance Recording for `Electricity`, her collaboration with Silk City at the61st Annual Grammy Awards. To date, her music has become a mainstay across all streaming platforms, where she has amassed over 6 billion streams.

Dua’s latest track `Don’t Start Now` is already on track to becoming a worldwide smash, having debuted at no 1 on The iTunes global Chart and is in the Top 10 of global Spotify and Shazam charts. It’salready Top 10 in numerous official country charts around the world and is the#1 most added track at US Pop radio on release. `Don’t Start Now` is taken from Dua’s highly anticipated new album which is due out in 2020.