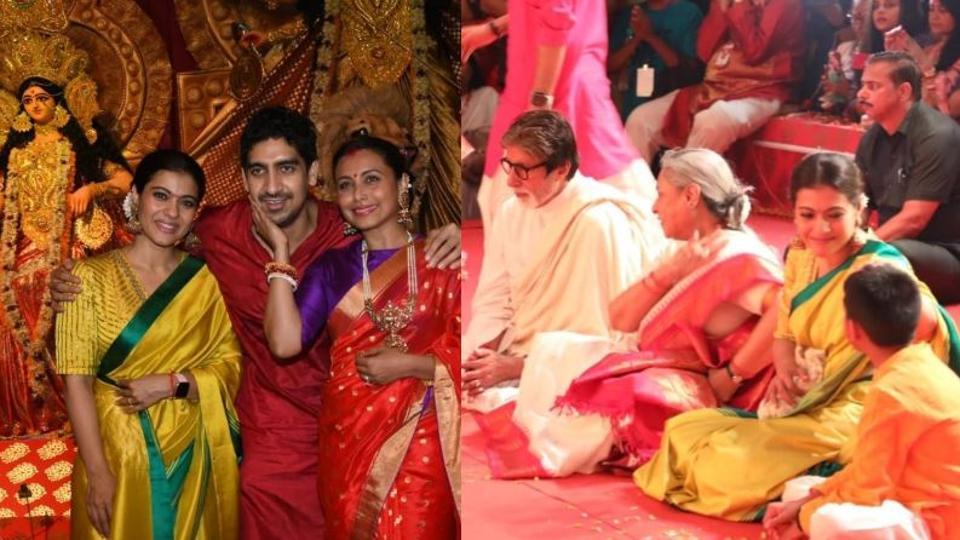 Actors Amitabh Bachchan, Jaya Bachchan, Kajol and her son Yug and cousin Ayan Mukerji, were seen at a Durga Puja pandal in Mumbai on Sunday.

In what can be called a Kabhi Khushi Kabhie Gham reunion, actors Rani Mukerji, Kajol, along with her son Yug, spent some quality time with Amitabh Bachchan and Jaya Bachchan at a Durga Puja pandal on Sunday. All five along with filmmaker Ayan Mukerji, who is also Kajol and Rani’s cousin, were seen chatting post the darshan.

The Bachchans and Kajol visited North Bombay Sarbojanin Durga Puja  Pandal on Sunday and spent time with the Mukherjee family, including Sharbani Mukherjee. While Kajol was in a yellow and green silk sari, her son was in a yellow kurta pyjama. Amitabh and Jaya were twinning in white and posed with them for a group picture. Rani was in a red silk sari paired with heavy traditional jewellery.

Kajol and Rani Mukerji share some light moments at the pandal. ( Varinder Chawla )

Kajol had earlier visited the pandal with mother Tanuja and sister Tanishaa on Friday. Kajol had proudly flaunted her handbag outside the pandal and told the paparazzi that it was made by her sister Tanishaa. She was also seen asking her to send the pictures she had clicked at the time.

Amitabh is currently busy with multiple projects, including the quiz show Kaun Banega Crorepati. The actor has already wrapped shooting for Ayan’s upcoming film, Brahmastra. It stars Alia Bhatt and Ranbir Kapoor in lead roles, besides Mouni Roy. The film is delayed and will hit screens next year.

Also read: Bigg Boss 13: Arti Singh reveals history of depression, says ‘my mother died to bring me into the world’

He also has Shoojit Sircar’s Gulabo Sitabo, starring Ayushmann Khurrana, and Rumi Jaffery’s Chehre, with Emraan Hashmi. Both films are scheduled to release next year.

Kajol was last seen in Helicopter Eela, which failed to perform at the box office. She is rumoured to be starring in husband Ajay Devgn’s Tanhaji: The Unsung Warrior.