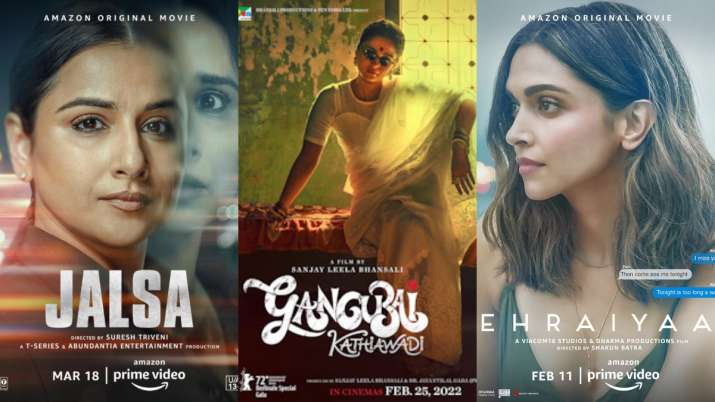 The sudden rush of titular roles for Bollywood actresses seems like a happy departure from the industry’s normally male-dominated norms. Women-centric films are not commonplace in Bollywood and bringing title roles to heroines is still a rare phenomenon. The few films that have adhered to the trait in succession lately, are therefore worth taking note of, be it Deepika’s relationship drama ‘Gehraiyaan’,Alia Bhatt’s ‘Gangubai Kathiawadi’ and now, the eagerly-awaited Amazon Prime Video original film ‘Jalsa’ featuring two powerful two performers— Vidya Balan and Shefali Shah.

The success of ‘Gehraiyaan’ and Gangubai Kathiawadi’ has certainly reinstated filmmakers’ faith in backing subjects headlined by talented and celebrated actresses of Bollywood. No wonder, all eyes are on Amazon’s next ‘Jalsa’ touted to be the next big thing in the OTT space.

With powerhouse performers like Vidya Balan and Shefali Shah sharing the screen space for the first time, ‘Jalsa’ is certainly one of the most highly-anticipated movies of 2022 that looks to redefine and revolutionise women characters in the entertainment industry.

Touted as one of the best content-driven films of 2022, ‘Jalsa’ has also been creating a lot of buzz, especially after the release of the trailer that gave the audience a glimpse of how intriguing this story is going to be. Known for acing every character with her acting, Vidya Balan plays the role of Maya, a journalist in the film. Directed by Suresh Triveni, the drama thriller also stars the powerful performer, Shefali Shah as Rukhsana, Maya’s house cook.

Replete with spellbinding performances and a nerve-wracking storyline, ‘Jalsa’ promises to keep audiences at the edge, leaving them wanting for more. ‘Jalsa’ will have a global premiere on Amazon Prime Video on March 18, 2022, in India and across 240 countries and territories worldwide.