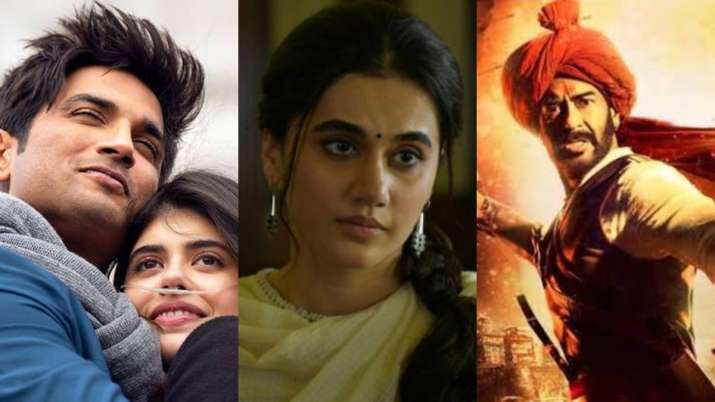 2020 was a bizarre year for Bollywood. The COVID-19 crisis severely affected the entertainment industry as the release of many films got delayed and shoots were halted. However, as the pandemic rolled around and theaters shuttered, some blockbuster films–such as Sooryavanshi and ’83, ended up holding off their theatrical release while others went to the streaming platforms. Despite this, here are top Bollywood films from this year which are worth adding to your watchlist:

The film traces the life of the fierce Maratha warrior, Tanhaji Malusare, who was one of Chhatrapati Shivaji Maharaj’s closest aides. It is a historical action film directed by Om Raut and produced by Bhushan Kumar, Krishan Kumar and Ajay Devgn under T-Series Films and Ajay Devgn FFilms. Also, Saif Ali Khan‘s performance as Udaybhan was deliciously wicked.

Sushant Singh Rajput’s last film Dil Bechara is an adaptation of John Green’s best-selling novel The Fault In Our Stars. The film left us moist-eyed. As romance blooms between two youngsters,  Kizie Basu (Sanjana Sanghi) and Manny (Sushant Singh), who strike up a beautiful bond as they fight cancer. The film is directed by Mukesh Chhabra.

‘Thappad’ explores the dynamics between a doting wife and her husband after they hit a rough patch. Anubhav Sinha’s Thappad shed light on the damaging sexism rampant in Indian homes. The film takes its own time in expressing the dynamics of Amrita (Taapsee Pannu)-Vikram(Pavail Gulati)’s arranged marriage and how the two of them manage to blend in well with each other’s life and families. However, their happiness is shattered when he slaps her at an office party causing her to file for a divorce.

The film Stars Janhvi Kapoor in the titular role, this is a stirring biopic about the triumphs and trials of Gunjan Saxena — India’s first female combat pilot, who never gave up on her dreams while battling the toxic masculinity and age-old patriarchy existing in the society. Gunjan emerged a trooper in the Kargil War after battling stereotypes at her workplace. Known as the ‘Kargil Girl’, she was honoured with the Shaurya Vir. It is directed by Sharan Sharma and produced under Dharma Productions and Zee Studios. The film also stars Pankaj Tripathi and Angad Bedi in supporting roles.

Director Meghna Gulzar’s ‘Chhapaak’ is a haunting tale of acid attack survivor, Laxmi Agarwal, who has become a symbol of strength and inspiration for many women. Bollywood actress Deepika Padukone is the soul of the film, delivering a brilliant performance as Malti (acid attack survivor) alongside Vikrant Massey and Madhurjeet Sarghi.

Chhalaang is a sports comedy-drama film directed by Hansal Mehta. It is produced by Ajay Devgn, Luv Ranjan, Ankur Garg and presented by Bhushan Kumar. It stars Rajkummar Rao, Nushrat Bharucha and Mohammed Zeeshan Ayyub. The plot revolves around a young PT teacher, who faced stiff competition from a new coach.

Angrezi Medium is a comedy-drama film directed by Homi Adajania and produced under the production banner Maddock Films. A spiritual sequel to the 2017 film Hindi Medium, the film stars Irrfan, Radhika Madan, Deepak Dobriyal and Kareena Kapoor Khan. It is a daughter-father drama, but it’s late actor Irrfan Khan’s final film before he succumbed to cancer. The film beautifully captured the dynamics of single parenting and teenage freedom.

Panga, directed and co-written by Ashwiny Iyer Tiwari was produced by Fox Star. Kangana Ranaut and Jassie Gill star in the lead roles, while Yagya Bhasin, Neena Gupta, Richa Chadha, Megha Burman and Smita Tambe appearing in supporting roles. The film talked about how it’s never late to chase your dreams. It shows Jaya’s passion for kabaddi as she decides to make a comeback to the sport, at the age of 32. But it is not an easy ride as she is riddled with domestic responsibilities as a mother and wife.

Shakuntala Devi is a biographical drama written and directed by Anu Menon and produced by Sony Pictures Networks India and Vikram Malhotra under his banner Abundantia Entertainment. The film stars Vidya Balan as Shakuntala Devi, who was also known as the “human computer”, along with Jisshu Sengupta, Sanya Malhotra, and Amit Sadh. It is based on the life of Shakuntala Devi, the renowned mathematician, whose astounding skills of solving complex math problems in record time won her admiration in the world around.

Gulabo Sitabo is a comedy-drama film directed by Shoojit Sircar, produced by Ronnie Lahiri and Sheel Kumar. Set in Lucknow, it stars Amitabh Bachchan, Ayushmann Khurrana and Farrukh Jaffar. Fatima Mahal is at the centre of a long feud between its owner’s Mirza (Amitabh Bachchan) and the stubborn tenant Baankey Rastogi (Ayushmann Khurrana).

Shubh Mangal Zyada Saavdhan is a romantic comedy film written and directed by Hitesh Kewalya and produced by Aanand L. It is a spin-off to the 2017 film Shubh Mangal Saavdhan. The film stars Ayushmann Khurrana, Jitendra Kumar, Neena Gupta and Gajraj Rao. The film tells the story of a gay man and his partner, who have trouble convincing his parents of their relation. Salesmen Aman Tripathi (Jitendra Kumar) and Kartik Singh (Ayushmann Khurranna) fell in love. They live together and their relationship grows and blossoms without being frowned upon. However, problems start when the two decide to go back to Allahabad and convince Aman’s parents.