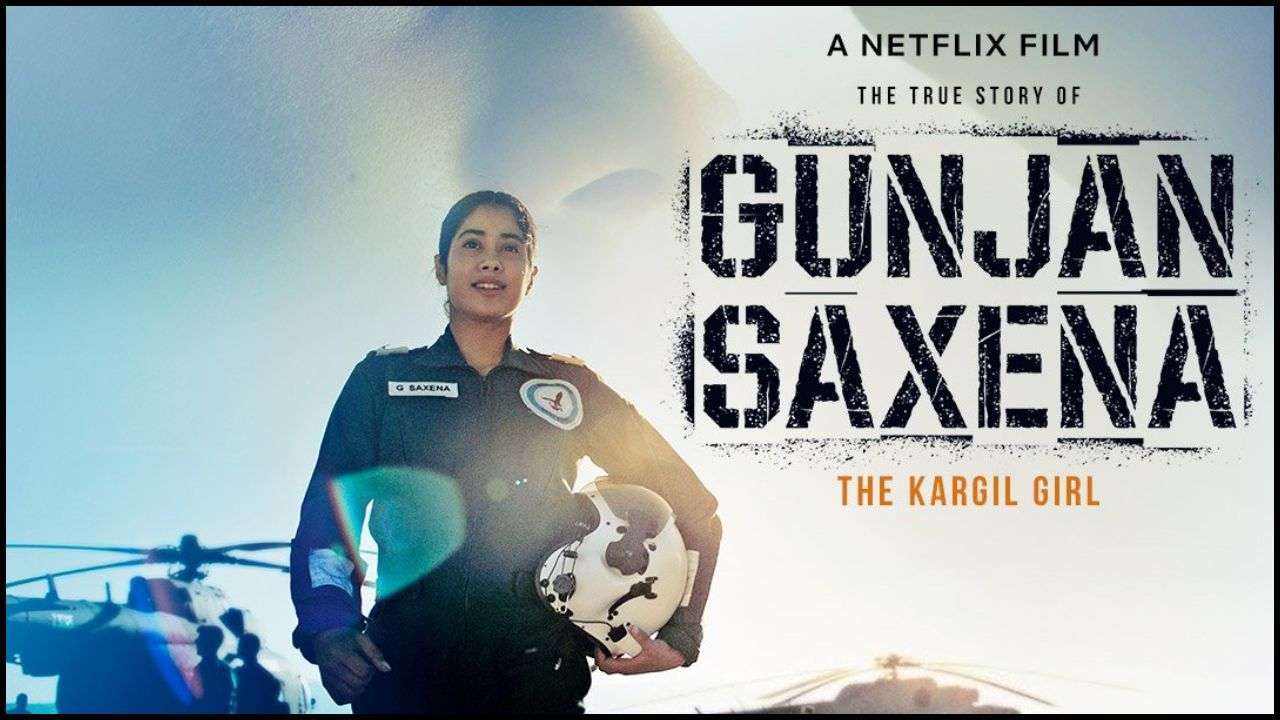 We will gloss over veracity of facts, particularly the presentation of Indian Air Force, and keep the scope of this review to discussing cinematic elements. Factuality has never been a strong point with mainstream Bollywood, after all.

Gunjan Saxena’s life unfolds as a set-piece biopic, played out to a pattern. The approach has its advantage. When your aim is to inspire with the story of an achiever who triumphed against all odds, keeping it simple and formulaic is the best way to connect with the larger audience.

The flip side is “Gunjan Saxena: The Kargil Girl” misses out on probing deeper into the mind and persona of its subject, unlike the recent “Shakuntala Devi”. There is no visible effort to explore the warts of a human being here, while defining a woman who defied every stereotype to emerge a winner.

Compared to the late math genius Shakuntala Devi, therefore, Flight Lieutenant Gunjan Saxena gets a rather unidimensional biopic, which adopts a set-piece tactic, dividing the story into chapters.

You have Gunjan’s years as a dreamer, a teenager growing up in an era that scoffs at the idea of a girl who wants to fly. Once she has defied all diktats and made it into the Air Force training academy, you have Gunjan’s formative years — where her battle to trounce the overwhelming chauvinistic prejudice among an entirely male bunch of seniors and batchmates would seem like a bigger challenge than learning how to fly a chopper. Finally, you have the Kargil War where Gunjan, at the age of 24, became the first female Indian Air Force pilot to fly in combat zone.

For the sake of taking off on a high note, debutant director Sharan Sharma and his co-writer Nikhil Mehrotra start the story in chapter three as Gunjan is called in to fly for a recce in the war zone. That initial element of drama, however, is shortlived as we are immediately taken to Gunjan’s past — to the days when her dream of growing up to be a pilot is mostly ridiculed by almost everyone around, except her.

To their credit, Sharma and Mehrotra manages to retain an engaging appeal about their storytelling all through the film, and that remains the main reason why the near-two hour runtime is watchable all along. Mehrotra, whose works include “Dangal” and “Chhichhore”, has utilised many cliches of standard Bollywood drama but credibly keeps his storytelling from going over the top, either with melodrama or with pop jingoism.

It is an engaging watch overall, with some well-executed scenes — sequences featuring Janhvi Kapoor as Gunjan Saxena and Pankaj Tripathi as her father are, especially, excellent and among the highlights of the film. Mehrotra’s screenwriting is subtly while creating drama in Gunjan’s training academy phase, too.

And yet there are the essential trappings that keep coming back to remind you this is a Bollywood film. It is amusing, for instance, to watch a film in 2020 that, while narrating a story with Kargil War as backdrop, refers to the Pakistani army as “dushman”. The banner of Dharma Productions at the start should perhaps prepare you for it, but there are too many songs — the dream gaana, the military training gaana, even a shaadi gaana (co-producer Karan Johar has actually managed to squeeze in a slice of “Saajan ji ghar aaye” into the screenplay at one point for a hearty effect).

All such things, of course, goes into packaging a tailormade script for Janhvi. Although there are still many rough edges to polish, the young actress is definitely in far more assured form in this author-backed project. She is supported by a handpicked cast that perfectly fit their roles. Pankaj Tripathi, Angad Bedi as Gunjan’s elder brother, and Viineet Kumar Singh and Manav Vij as Gunjan’s senior officers are particularly worth applause.