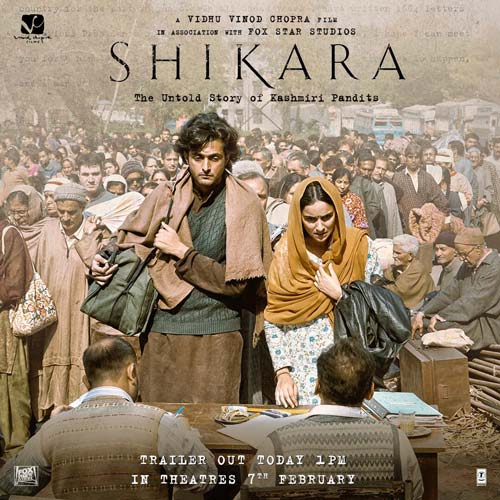 The trailer of ‘Shikara’ has received appreciation from all across for its heartwarming and thought-provoking storyline. The response has been so tremendous and has resonated with teh audience so much that even after four days since its release, the trailer is still trending on YouTube. A powerful depiction of Kashmir of 1990, Vidhu Vinod Chopra’s directorial has struck the right chords amongst the audience.

The film, ‘Shikara’ brings back the untold story of Kashmiri pandits from the valley of 1990. The trailer stars Aadil Khan as Shiv Kumar Dhar and Sadia as Shanti Dhar, giving us the storyline of blooming romance in the conflict-ridden state of Kashmir. From the theme to the gripping background, everything about the trailer is garnering praises from all across.

Social media is abuzz with appreciation from not just the entire community of Kashmiri Pandits but also the wide population who are witnessing the glimpse of the history on their screens. The YouTube video has all the comments where Kashmiris are holding pride in it and the comments section is flooded.

The trailer of the film was launched amongst a starry presence in Mumbai which chronicles the tale of Shiv and Shanti, a couple. Vidhu Vinod Chopra has chronicled their journey through the phase and their sufferings during the exodus where Shikara presents a gripping trailer.

The trailer has history, reality, curiosity and thrill in its storyline. Earlier, the motion poster of the film has also created all the buzz. The film is filmmaker Vidhu Vinod Chopra’s tribute to his mother and highlights the story of more than 4,00,000 Kashmiri Pandits who lost their homes and became refugees in their own country.

Shikara, a film by Vidhu Vinod Chopra is all set to release on 7th February, 2020. Presented by Fox Star Studios. Produced by Vinod Chopra Productions and co-produced by Fox star studios.