HOUSTON: In honour of fallen Indian-American 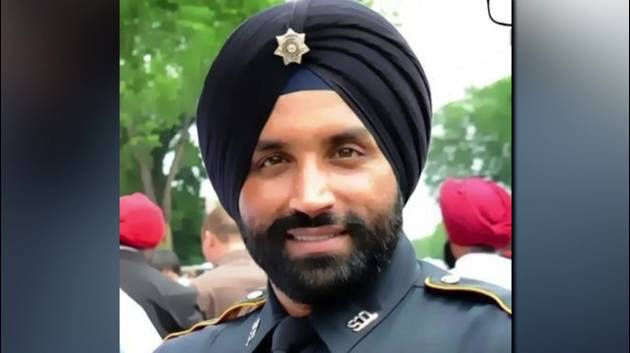 Sandeep Singh Dhaliwal, a 10-year veteran of the Harris County Sheriff’s office, was gunned down on September 28 during a midday traffic stop in the city

In honour of fallen Indian-American Sikh police officer Sandeep Singh Dhaliwal, the Houston Police Department has changed its dress code policy to allow the minority community members to represent their faith while on duty.

On September 28, Dhaliwal, a 10-year veteran of the Harris County Sheriff’s office and its first Sikh deputy, was gunned down while conducting a mid-day traffic stop in northwest of Houston. The 42-year-old trailblazing police officer made national headlines when he was allowed to grow a beard and wear a turban on the job. “@houstonpolice is now the largest law enforcement agency in TX to adopt a policy allowing officers to wear articles of faith on duty,” City of Houston tweeted on Monday.

“Proud to announce HPD (Houston Police Department) will accommodate Sikh officers by letting them wear their articles of faith while on duty — one of the largest police departments in the country to do so. Deputy Dhaliwal taught us all a valuable lesson about inclusion. It was an honour to know him,” Houston Mayor Sylvester Turner tweeted.

“Proud to stand with @SylvesterTurner and so many members of our community to announce our policy and get the word out to our greater community,” Chief of the Houston Police Department Art Acevedo tweeted.

In a news briefing, the Houston Police Department announced that the decision was taken in order to be more inclusive in honour of the fallen Sikh deputy, Fox News reported. “I’m honoured,” Dhaliwal’s father, Pyara Singh Dhaliwal, was quoted as saying by the KHOU television station. “The honour I got from this community and from the chief, the police department and the sheriff department is…I have no words to say. So, I very much thank all of these bodies. Wonderful moment,” he said.

Sikh advocacy groups also praised the policy change. “This policy change shows that no one should ever choose between their faith or career, and also that these articles of faith pose no barrier to service,” Nikki Singh, policy and advocacy manager for the Sikh Coalition, was quoted as saying by the CNN.

Dhaliwal, worked with United Sikhs, a global humanitarian relief and advocacy non-profit, to help organise the donation of truckloads of supplies for first responders after Hurricane Harvey. He was allowed to wear the turban and beard while patrolling the streets to bolster cultural diversity.