Hum Do Humare Do Trailer Out: Rajkummar Rao, Kriti Sanon’s film will leave you ROFL-ing 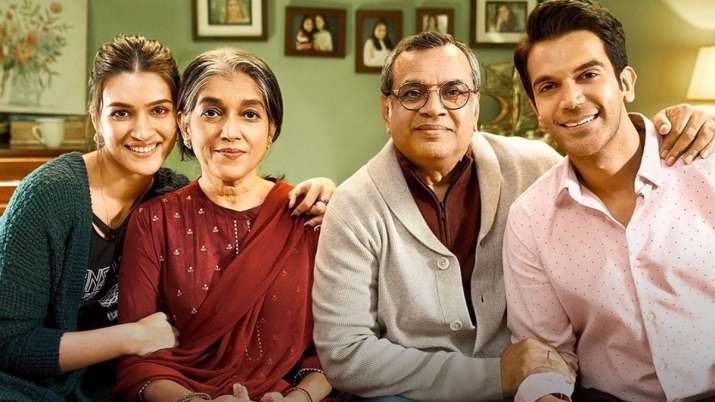 Actors Rajkumar Rao and Kriti Sanon on Monday released the trailer of their upcoming film ‘Hum Do Humare Do.’ The film is a romantic comedy, also starring veteran stars Ratna Pathak Shah and Paresh Rawal. The Dinesh Vijan production takes an “out of the box” look at adoption, telling the story of a man forced to “arrange” a set of parents to impress the love of his life.

Going by trailer, Hum Do Humare Do can be called a fun ride as it leaves us ROFL-ing at every step. From Rajkummar’s epic comic timing to Paresh and Ratna’s spectacular screen presence, there is absolutely nothing to dislike.

Watch Hum Do Humare Do Trailer:

Speaking about the movie, Dinesh Vijan says, “Maddock trusts in the power of content driven films, while ‘Mimi’ was a delightful family entertainer, with ‘Hum Do Humare Do’, we take the essence of family further, because in the end, a family is a set of people we love and cherish. Our film is a wholesome comedy that can be enjoyed by all three generations”.

This will be the second time Rajkummar and Kriti will be seen sharing screen space together. The two have previously worked in ‘Bareilly Ki Barfi’. Earlier, the makers shared a teaser of the film that showed glimpses of production house Maddock Films’ previous movies like ‘Stree’, ‘Luka Chuppi’, ‘Bala’ and ‘Mimi’. Introducing Kriti and Rajkummar’s characters, then questioned, “Ab humara hero kya karega?” The teaser saw a nervous Rajkummar Rao waiting for Kriti Sanon’s character to show up, and within a few seconds, Kriti entered the frame.

She then told Rajkummar’s character that they should settle the subject. Going by Paresh Rawal’s voiceover in the promo, the young couple was seen keen to adopt the parents. There are also glimpses of the inimitable Paresh Rawal as well as the delightful Ratna Pathak Shah in the teaser.

‘Hum Do Humare Do’ also stars Aparshakti Khurana. It is directed by Abhishek Jain, produced by Dinesh Vijan, a Maddock Original film, starts streaming from October 29 on Disney+ Hotstar.