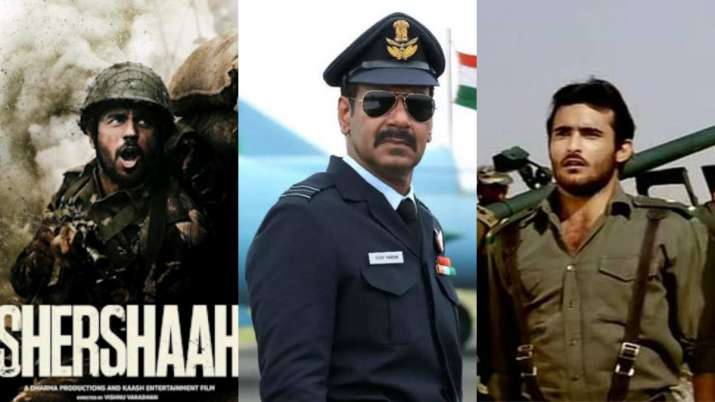 August 15, 2021 will mark the 75th Independence Day this year and will be a moment of proud for all the citizens. People will indulge in watching some special shows on their Television screens today. Not only this, but several patriotic films will also be aired on this day. Bollywood and patriotism go way back. The list of Hindi films depicting magnificent stories of freedom fighters and their struggle to make India an independent nation is endless. On the auspicious ocassion of I-DAY, let’s look at some patriotic films that will surely pump up the adrenaline of all patriots. Inspiring, emotional and determining — each of these movies have something in common — uncompromising dedication towards India and her people.

The film portrays the difficulties faced by an undercover agent’s wife while he gets kidnapped by a group of terrorists in Jammu and Kashmir. While Roja’s (played by Madhoo) daunting struggle comes to the forefront, a soldier’s love and dedication towards his nation make it a good watch on this day.

The multi-starrer war drama revolves around the circumstances during the 1971 Indo-Pakistani war. Inspired by the true incidents during the time, the movie majorly focuses on the Battle of Longewala. Epic performances by Sunny Deol Jackie Shroff, Sunil Shetty, Akshaye Khanna, Tabu among others present a heart-wrenching narrative coupled with soul-touching songs.

Once Upon a Time in India (2001) Ashutosh Gowariker’s Lagaan is a farmer’s tale to free his fellow villagers from the unjust high British tax (lagaan). Bhuvan (played by Aamir Khan) takes an oath to defeat the British in their favourite sport (cricket) and free his family and fellow farmers from the cruel and unjust rulers. The following events make the film an inspiring watch to revamp the firm and compassionate character in ones’ self. The

Rajkumar Santoshi recreated the life of freedom fighter Bhagat Singh and brought his ideologies to life through his cinematic representation. Actor Ajay Devgan played Bhagat Singh while Sushant Singh was seen in the role of Sukhdev Thapar and D. Santosh characterized Shivram Rajguru. The film went on to win two national film awards.

The historical war drama revolves around the Kargil war fought between India and Pakistan. Multiple big names from the fraternity including Sanjay Dutt, Saif Ali Khan, Rani Mukerji, Ajay Devgan, Sunil Shetty amidst others have brought life to the characters of the film.

The film starring Shah Rukh Khan is the story of a young scientist working at NASA who comes to visit his Kaveri Amma (Kishori Ballal) but couldn’t get back as he feels that there is lot that he can do about the scenario of his hometown. He dedicates himself to the development of his hometown. It is the first Indian movie to be filmed inside the headquarters of NASA.

The film initially deals with a man’s will to prove that he is somebody in front of his girlfriend. However, later on, the plot goes on to vivaciously depict the circumstances during the LoC war. Hrithik Roshan and Preity Zinta star in the movie while Farhan Akhtar directed the project.

Rakeysh Omprakash Mehra’s ‘Rang De Basanti’is a film that talks about the societal issues in India and how the mass can deal with these. It draws the example of exemplary freedom fighters Bhagat Singh and his fellows who became uncommon from within the common. The film was released on the Republic Day of 2006 and received accolades from national and international boards.

The spy thriller film features Alia Bhatt and Vicky Kaushal in lead roles. Sehmat (Alia) is sent to Pakistan after she got married to Iqbal (Vicky) to work as a spy. Sehmat determination to bring out information and sacrifices that she made in the process makes it worth watching on this day.

The Surgical Strike (2019) The 2019 release makes one relive the moments from the historic surgical strike of India post-Pulwama attack. Vicky Kaushal, Mohit Raina, Paresh Rawal and Yami Gautam do justice to the characters and the story becomes the inspiring tale every Indian should watch at least once.

Although Bollywood presented a film on India’s Kargil war many years ago with ‘LOC: Kargil’, the film failed to mention India’s first woman combat aviator Gunjan Saxena’s contributions in the victory. ‘Kargil Girl’ starring Janhvi Kapoor is based on Saxena’s courageous takes in the film.

Ajay Devgn’s film stunned audiences with its gripping portrayal of the life of Maratha warrior Taanaji Malusare. The film has to date raked in over Rs 197 crores across India and has been declared tax-free in several states of the country.

The recently released Sidharth Malhotra, Kiara Advani starrer has been impressing audiences with its plot which revolves around the events and emotions behind the Kargil war. The biographical action drama traces the story of Captain Vikram Batra and Dimple Cheema.

Starring Ajay Devgn, Sonakshi Sinha, Sanjay Dutt, Nora Fatehi and others in the lead, the film released on August 13 on Disney Plus Hotstar. It is set amid the backdrop of the 1971 Indo-Pak war.