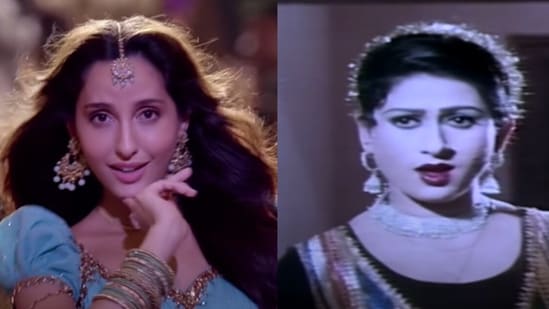 Bhuj: The Pride of India released a new track titled Zaalima Coca Cola starring Nora Fatehi earlier this week. The song has been sung by Shreya Ghoshal and the music has been given by Tanishk Bagchi. While the song has received over 40 million views in just three days, the track appears to be a remake of an old Punjabi song of the same name, sung by Pakistani singer Noor Jehan.

The original Zaalima Coca Cola Pila De was released in 1986. Noor Jehan had recorded the song for the Punjabi film Chan Te Soorma. While Nora Fatehi’s song doesn’t recreate the entire track, Tanishk Bagchi and lyricist Vayu have retained the chorus of the song.

The remake hasn’t gone down well with internet users. Many criticised the film for not giving the original due credit. “#ZaalimaCocoCola @TSeries at least give credit to Madam Noor Jahan,” a fan said. “India boycotting Pakistani artists and then remaking their songs is hypocrisy at its best! #ZaalimaCocoCola originally sung by Noor jehan is iconic,” another said.

Another person wrote that the recreation doesn’t come close to the original track. The fan’s tweet read: “Zaalima Coca Cola Pila De was originally sung by Madam Noor Jehan. no one No one can even touch madam’s voice.”