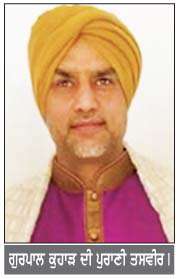 KITCHENER — A 77-year-old man accused of murdering his son appeared in a Kitchener courtroom Monday.

“This is obviously a tragedy that has struck residents here in Kitchener,” lawyer Vikram Singh, who represented Ajit Kohar on Monday, said in an interview. “It’s shocking.”

Singh was asked how Kohar is feeling.

“I can simply says he’s distraught and devastated.”

Kohar was ordered to have no contact with seven named individuals. The only thing Kohar said in court was “yes” when asked by a justice of the peace if he understands the order. A Punjabi interpreter translated proceedings for him.

Also in court for the brief appearance were several family members.

Kohar, with a moustache and long grey beard, wore a green jacket and what looked like jail-issued orange pants. He is being held at Maplehurst jail in Milton. The case was adjourned to Feb. 3 in video court.

Waterloo Regional Police were called to the home in the area of Strasburg Road and Huron Road just before 7 p.m. on Saturday after a 911 call about an injured man. Police arrested Ajit Kohar at the house.