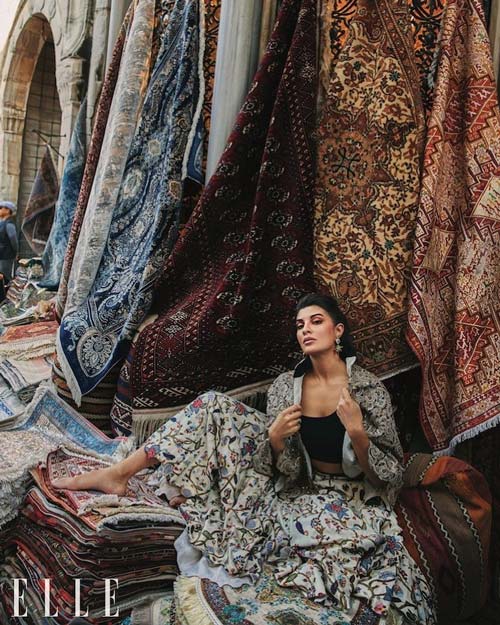 Jacqueline Fernandez is stealing hearts with her prodigious acting, youtube vlogs, and her impeccable style. Tinsel town’s fashionista and style inspiration for her fans, Jacqueline has stolen the show with her charisma as she gets featured on the cover of Elle India’s November issue.

As a fashion watcher, Jacqueline always seems to get it right with her fashion and sartorial choices. Elle India took to its Instagram handle to give us a sneak-peek into one of the inside images from the shoot and she is surely soaring the temperatures high.

Jacqueline is sultry yet spellbinding dressed in a delicately embroidered ivory color skirt with heavily embellished ivory jacked and a blacktop which is breaking the monotony of the outfit. Striking an intense pose in between the Turkish carpet, she looks like a vision to behold. Adding to the perfect stance is the neatly tied tresses, dewy makeup, and statement earrings making it a ravishing look.

With her unparalleled charm, this winsome actress has garnered huge appreciation from her fans and they cant hold onto see what the actress will venture next into.

On the professional front, Jacqueline recently made her digital debut with Netflix’s Drive and will be seen next in yet another Netflix’s movie “Mrs. Serial Killer”. She will also be seen in Kick franchise “Kick 2” opposite Salman Khan, produced by Sajid Nadiadwala.