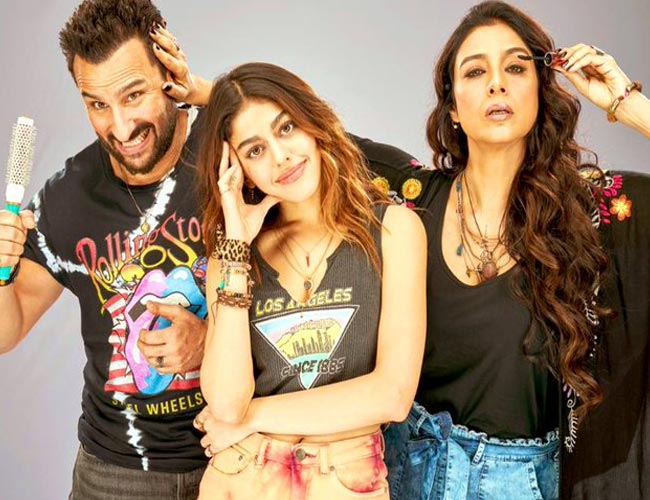 Jazz aka Jaswinder Singh (Saif Ali Khan) is a middle-aged Indian man in his mid-40s living in London. He believes in partying hard and enjoying life to the fullest and staying away from any kind of commitment. His life is simple, part-time property broker in day and a playboy in the night who goes to clubs to have a drink and hook up with girls half his age.

But one day, he gets a surprise when he brings home another girl Tia (Alaya) who tells him that there is a 33.33 percent chance that Jazz is her father. The DNA tests reveal that Jazz is actually Tia’s father and after discovering his newfound fatherhood he gets another surprise when it is revealed that Tia is pregnant and the father is soon going to be a grandfather too.

Jazz is not at all ready to bear any kind of responsibility and doesn’t want his to give up his playboy lifestyle so he washes his hands off Tia and his grandchild politely and what happens further forms the crux of the film.

Director Nitin Kakkar has done a fantastic job in Jawaani Jaaneman and brings an enjoyable and fun modern-day comedy to our screens. He has stayed away from any kind of melodrama and makes it clear in the beginning that he is here to entertain you and makes no compromise on that. The film’s screenplay is tight and is full of quirky and light-hearted fun moments making it a fun ride which you can watch even with family.

Playing the carefree party animal type characters comes naturally to Saif so he just shines here once again. He is perfect as the charming and fun-loving Jazz and his character doesn’t remind you of Cocktail or any other film for that matter as here he is a more evolved guy who is different from what he projects himself to the world. He is secretly coming to terms with his age, he dies his hair and even needs glasses to read which looks genuine and convincing.

Alaya F in her debut role has done a fine job and she fits her character. Her acting is natural and carries a kind of maturity which you won’t find in many newcomers. Tabu as Tia’s hippy modern mother Ananya is a treat to watch on screen sadly she doesn’t have much screen time but she is superb as always and watching her and Saif together after so long is a delight in itself.

Farida Jalal as Jazz’s mother, Kumud Mishra as Jazz’z business partner Dimpy, Chunky Pandey as the club owner Rocky, Kubbra Sait as Jazz’s hairstylist Rhea and Kiku Sharda as the doctor make up for a strong supporting cast and add to the fun.

The music of Jawaani Jaaneman is ok and doesn’t have much t offer other than some recreated songs that fit finely in the film still, Saif dancing on ‘Ole Ole 2.0’ was good.

Overall, Jawani Jaaneman is an unconventional and quirky film that delivers what its trailer promised, a lot of fun and comedy in the guise of modern human relationships. It is a light-hearted film that is amusing and can be watched with your family. Go without a second thought.