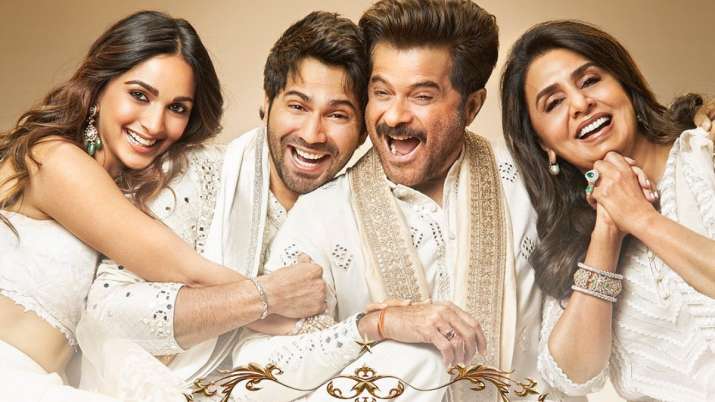 ug Jugg Jeeyo motion poster: Varun Dhawan, Kiara Advani,Ani Kapoor and Neetu Kapoor, Jug Jugg Jeeyo has been creating a lot of buzz ever since its inception. The team is not leaving any stone unturned to promote their film. On Friday, the makers unveiled the motion poster of the film. Varun Dhawan took to Instagram and introduced Raj Mehta’s film as a family comedy. He wrote, “Get ready for some family comedy – famcom. Are you ready to come to our family reunion with your family?”

In the poster, Kiara Advani, Anil Kapoor and Neetu Kapoor also join Varun as they pose together. By the look of it, the star cast seems to be a part of some wedding function as they are shown dressed in traditional outfits.

Varun also penned a heartfelt note ahead of the release of the film and shared a couple of posters. He stated, “My first film back in the theatres after the pandemic. Feel like a newcomer. Don’t think there’s any better way for me to start then comedy and have the honour of teaming up with the @anilskapoor sir and @neetu54 ma’am. My hardworking talented partner in everything in this one @kiaraaliaadvani. Also @manieshpaul paaji love and we our introducing our gudiyaaa @mostlysane. Thank u @raj_a_mehta it’s been a long tuff happy emotional journey but we are here brother. The freaking day is here. Thank u @karanjohar and @apoorva1972 Ul are my family and @azeemdayani the mastermind. Let’s do this JMD rocks.

Directed by Raj and produced by Hiroo Yash Johar,Karan, and Apoorva Mehta, the romantic drama went on floors in Chandigarh in December last year. The film also stars Maniesh Paul and Prajakta Koli in important roles. After several delays due to COVID19, the film is slated to hit the silver screen on June 24, 2022.