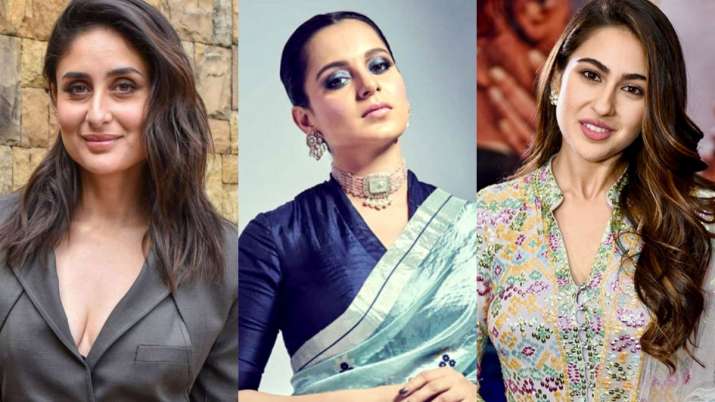 Bollywood actress Kangana Ranaut has claimed that Kareena Kapoor Khan had asked her step-daughter Sara Ali Khan to not date her Kedarnath co-star Sushant Singh Rajput which was one of the ways to ridicule him. In a recent interview with Times Now, Kangana opened up about her opinion on the Sushant death case and said that the industry had made fun of him because he was an outsider. Talking about Sara and Sushant, she said, “When he was dating Sara, they made sure they broke up. Even Kareena went on record to say that don’t date your first hero, so they openly did character assassination of him, ridiculed him. When that boy was completely cornered, then another group of emotional vultures came and they did what they did”

Kareena Kapoor Khan had said on Karan Johar‘s chat show Koffee With Karan that Sara should not date her ‘first hero.’ Sara had made her debut opposite Sushant Singh Rajput in Abhishek Kapoor’s Kedarnath. Further putting forward her thoughts about the industry, Kangana said, “First of all like I said, the movie mafia which tortured Sushant, banned him, I have already spoken about them. The production houses that are targeting me, they have their own pet media who tried to assassinate his character, called him a rapist and cornered him.”

Earlier, when the news about Sushant and Sara dating started surfacing the internet, Kangana had tweeted, “News of Sushant Singh Rajput and Sara affair was all over the media, apparently they were even sharing a room during their outdoor, why these fancy Nepotism kids show dreams to vulnerable outsiders and then publicly dump them? No wonder he fell for a vulture post that.” In another tweet she said, “I believe Sara must’ve loved him he wasn’t a fool to fall for a girl whose affection isn’t genuine but she must have been under pressure, what I shared with Hrithik was genuine at that point I still have no doubts about it why suddenly he became so hostile is still a mystery to me.”

Sushant’s friend Samuel Haopkin was the one who opened up about the affair of Sushant and Sara when he took to social media and wrote, “I remember the time during Kedarnath promotions… Sushant and Sara were totally in love…they were inseparable… So pure and childlike innocence. They both had tremendous respect for each other which was so rare to see nowadays in relationships.”

Talking about how much respect Sara had for Sushant’s friends, family and even his staff, Samuel added: “Sara along with Sushant head genuine respect for everyone in Sushant’s life…be it family, friends and even staff. I wonder whether Sara’s decision to break up with Sushant right after Sonchiriya’s box office performance was due to any pressure by the Bollywood Mafia.”

Commenting on Samuel’s post, “Pavitra Rishta” director Kushal Zaveri, who was a close friend of the late actor, wrote: “Someone had to say it! More power to you bro.”