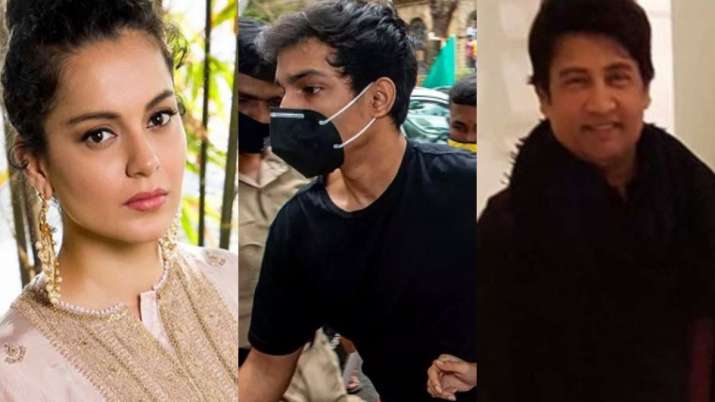 The Narcotics Control Bureau on Friday night arrested Rhea Chakraborty’s brother Showik and Sushant Singh Rajput’s house manager Samuel Miranda as part of its probe into the drug angle in the Bollywood star’s death. The move was lauded by Sushant Singh Rajput’s supporters on social media including Shekhar Suman, actress Kangana Ranaut, the late actor’s sister Shweta Singh Kirti and many others.

The Narcotics Control Bureau on Friday night arrested Rhea Chakraborty’s brother Showik and Sushant Singh Rajput’s house manager Samuel Miranda as part of its probe into the drug angle in the Bollywood star’s death. A 5-member NCB team raided Rhea’s house early morning and after a three-hour search, it detained Showik and seized his laptop and mobile phone. Tightening the noose on Rhea Chakraborty, the agency also summoned her for questioning on Saturday. The latest development was lauded by Sushant Singh Rajput’s supporters on social media including Shekhar Suman,actress Kangana Ranaut, the late actor’s sister Shweta Singh Kirti and many others.

Sushant Singh Rajput’s sister Shweta Singh Kirti reacted to Rhea’s brother Showik Chakraborty’s arrest in the narcotics case and said, “Thank you God..Keep guiding all of us in the direction of TRUTH!” Earlier in the day, she had tweeted, “Good going NCB… Thank You God.” after NCB detained Showik and Samuel Miranda.

Shekhar Suman, who has been supporting Sushant’s family in their fight to get justice, tweeted, “The first step toward success. congrats all of you. The small fish are caught. Now the time for the Big Sharks. I hope they are caught soon. The industry is cleaned up. The caucus is busted. The kingpins are arrested. Amen”

He also tweeted, “One day when all of us will look back we wd have a smile on our faces and beautiful and loving thoughts of Sushant.The sad thing is he will never come back but his spirit will inspire millions to go out and dream big for a long time to come.Good Bye.”

Actress Kangana Ranaut also lauded NCB for the arrest of Showik and Samuel Miranda. She said, “we collectively got justice for Sushant, this is a historic day a closed case was opened and justice is being delivered, this is the power of collective consciousness, I bow down to your love and compassion for Sushant ”

Meanwhile, the NCB registered a case under various sections of the Narcotic Drugs and Psychotropic Substances Act, naming Rhea, her brother, talent manager Jaya Saha, Sushant’s co-manager Shruti Modi, and Goa-based hotelier Gaurav Arya, on August 26 after the Enforcement Directorate wrote to it about the drugs angle. According to NCB officials, Showik and Miranda were arrested after 10 hours of questioning and after the agency got adequate evidence against them about their involvement in the drug case.

The NCB had also told a court that Showik used to order ganja and marijuana from drug-peddler Abdul Basit Parihar, who has been arrested and made payments to him over Google Pay. Showik and Miranda will be produced before a court on Saturday. An NCB official said that the agency will seek their custody for interrogation and to confront them with the other arrested accused. The official said that the duo will also be grilled over information from seized laptops and chats obtained by the agency.