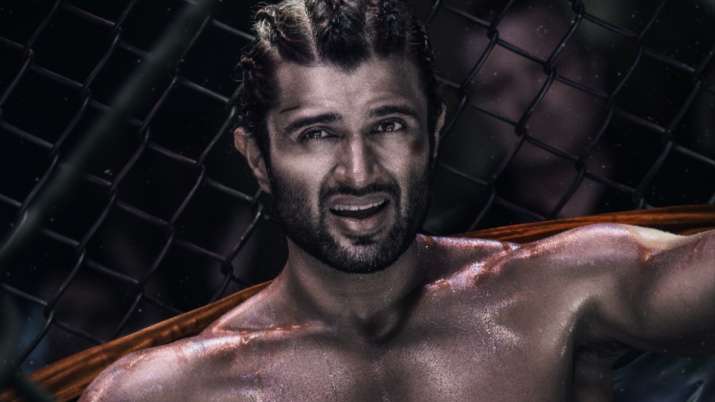 The wait is over. It’s early New Year celebrations for fans of Pan India star Vijay Deverakonda. The much-awaited glimpse of LIGER (Saala Crossbreed) is out. Director Puri Jagannadh who is known for presenting his heroes in stylish best avatars shows Vijay Deverakonda in never seen before action avatar in this big-budget Pan India project. Liger first glimpse begins with an MMA commentator introducing the actor as Liger giving all the elevation to his character. “Introducing the boy from India… Slum Dog Of Streets Of Mumbai… The Chai Wala… Liger…”

Vijay Deverakonda utters two small yet impactful dialogues in the video. “We are Indians,” says he which shows his love for the country. He indeed makes entry wearing the Indian flag. And the other dialogue, “Vaat Lagaa Denge”, defines his aggressive attitude.

The visuals are packed with breathtaking stunt sequences. In fact, the total emphasis has been given to Vijay Deverakonda who appears in a never before stylish avatar. Undergoing a tremendous makeover, Vijay looks like a beast with a chiselled physique and sports a completely new cornrows hairdo along with a ponytail. This indeed is the best look so far for the actor.

Going by the teaser, the film is about a Slumdog of Mumbai streets becoming a champion in MMA (Mixed Martial Arts) sport. However, the journey seems to be very inspiring. There is a fire in Vijay’s punches. We feel an adrenaline rush just in the glimpse and we can assume the kind of high the movie gives.

Ramya Krishna appears as Vijay’s mother, while Ronit Roy is seen as his coach. We don’t get to notice any other actors in the first glimpse. It has offered a perfect New Year presentation for action movie lovers. Vijay is stupendous as an MMA fighter and the character looks tailor-made for him. The sounds he makes give an authentic feel to the action sequences.

Liger is going to be one of the biggest action extravaganzas in India, as it features Legend Mike Tyson in a mighty role. Fans and cine-goers are waiting with bated breath to witness the real action on big screens.

Cinematography and background score are in synch to give a whole new experience.

In association with Puri connects, the film is being produced jointly by Bollywood’s leading production house Dharma Productions. Puri Jagannadh, Charmme Kaur,Karan Johar and Apoorva Mehta together are bankrolling the film on a grand scale.

Vishnu Sarma is handling the cinematography, while Kecha from Thailand is the stunt director.

Being made in Hindi, Telugu, Tamil, Kannada and Malayalam languages, the Pan India Movie is scheduled for release in theatres worldwide on 25th August, 2022.