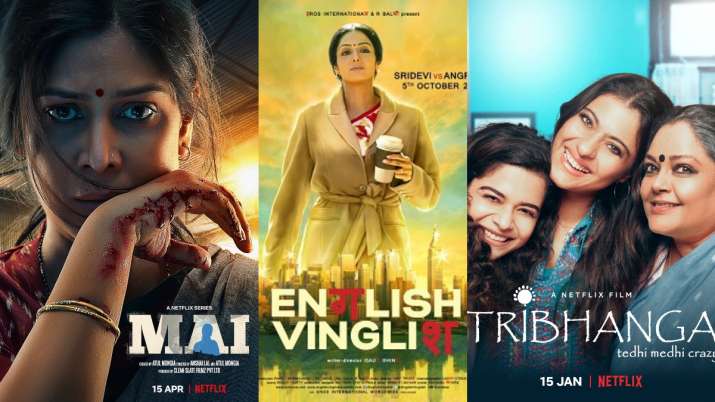 Mother’s Day 2022 Special: Since time unknown, the mother figure in Bollywood is usually one dimensional. From self-sacrificing mothers to avenging matriarchs to moms who one day stand in their power, Hindi cinema has portrayed motherhood in different hues. This Mother’s Day, we recommend titles that depict motherhood from a rare perspective by showing the emotional and circumstantial challenges women have to face while raising their children. These women are not perfect but they more real, powerful and breaking stereotypes than the ever-smiling, multi-tasking goddesses we expect mothers to be.

Mai revolves around the Chaudhary family of two brothers, who live in adjacent houses in the same colony, with their spouses and children. A middle-class wife, mother and volunteer nurse witnesses a first-hand tragedy that forever changes her world.In an instant, she finds herself sucked into a rabbit hole of violence, crime and power. In the show, Sakshi Tanwar plays Sheel, a woman who is determined to uncover the truth about the death of her daughter, Supriya, essayed by “Grahan” actor Wamiqa Gabbi.

The film is based on the life of the late Shakuntala Devi, who is widely revered as the human computer for her innate ability to make complex calculations within seconds. while the world was recognising her talent and showering her with lauresl, her personal life was in shamles. Her husband couldn’t keep up with her success and her daughter felt distant. The story shows how a woman is much more than just a mother. Vidya Balan essays the title role while Sanya Malhotra is seen playing the role of Shakuntala’s daughter Anupama, along with Amit Sadh and Jisshu Sengupta in pivotal roles.

Aarya is a show about a drug dealer’s wife who takes on her husband’s business after he suffers a horrible attack. The reins of the job fall in her manicured hands as she struggles through the muck of violence, blackmail, lies and treachery to keep her three kids safe. Aarya is a one-woman show as she displays reserve and fear without spelling them out, keeping the crux unspoken, hinting at the turmoil within.

Gullak in its three seasons narrates the story of a middle class family in a small north Indian town, trying to get by within their modest means. They are constantly looking to amp up their living standard, which sometimes leads the men into dodgy zones. The character of mother Shanti, played by Geetanjali Kulkarni makes a wonderful pivot as the wife-and-mother who keeps everything going, nagging everyone with equal energy so that they can come up with their best. The 2 seasons can be binge watched on TVF Play.

This Renuka Shahane directorial was produced by Ajay Devgn, Deepak Dhar, and Siddharth P. Malhotra and deals with unspoken issues that can complicate the relationship between mothers and daughters. It deals with three generations of mothers who learn in the course of their journey that the only way to heal yourself is to forgive each other. The story begins with a  successful writer who leads an unconventional life-style and is blamed by her daughter for her acute childhood trauma. When this daughter becomes a mother, she makes her own set of mistakes and is reminded by her child that no parent can get it perfectly right. The story reiterates that mothers can be fallible because they too are human. Starring Tanvi Azmi, Kajol and Mithila Palkar, the film encourages open conversations and empathy for flawed mothers who did the best they could.

This Yoodlee production and Aijaz Khan directorial portrays the difficulties of a mother who must raise her child alone while dealing with enormous personal grief and loss. The film is about a devastated Kashmiri family where the father has gone missing, leaving behind his seven-year-old son Hamid and Ishrat, his grieving wife. Rasika Dugal poignantly depicts the struggle of a mother whose child (played by Talha Arshad Reshi) wants answers she cannot give. How the two deal with their loss to once again bond with each other brings the film to a healing conclusion. Vikas Kumar as a kind, nurturing voice on the other end of a telephone line guides Hamid through a tough phase to prove that  it takes a village to raise children and no mother should have to do it alone. Talha Arshad Reshi went on to win a National Award for his performance and the film too won the National Award for Best Feature Film in Urdu.

This Aamir Khan and Kiran Rao production depicts the courage it takes for a mother to stand up to patriarchy and abuse within the family unit to protect her children. The Advait Chandan directorial also asks pertinent questions about why the girl child is denied the freedom to chase her dreams under one pretext or another? And why must she hide her true self if she wants to succeed in our milieu? This coming of age journey of Insia (Zaira Wasim), a  musically inclined girl who emerges from anonymity to make a triumphant appearance at an award show is both uplifting and inspiring but it is Meher Vij as her mother Najma, who represents the beating heart of the film.  The film also stars Aamir Khan himself with Mona Ambegaonkar and Raj Arjun in supporting roles.

‘English Vinglish’  could be the story of any regular household where a devoted mother and wife forget to tend to her own dreams. It also subtly portrays how homemakers are often underestimated and mocked by their own families.  Written and directed by Gauri Shinde, this award-winning film tells us the story of  Shashi, whose life revolves around her children and husband. She is a fledgling entrepreneur who makes sweets but is not taken seriously by her husband and daughter and her poor command over English is a source of much mirth in the household. Things change when Shashi gets to travel to the U.S. by herself and enrols in an English-speaking course. She slowly begins to rediscover the joyful, confident woman who was denied self-expression all this while.  Sridevi was hailed for her sensitive performance as Shashi after a 15-year hiatus while Adil Hussain, French actor Mehdi Nebbou, and Priya Anand played supporting roles. The film was produced by Sunil Lulla, R. Balki, Rakesh Jhunjhunwala and R. K. Damani.

This Ashwiny Iyer Tiwari directorial is a refreshing look at the kind of a mother, mainstream Hindi cinema chooses to ignore. A house-maid with stars in her eyes, the spunk to defy the odds and give the world of limitless opportunities to her young daughter. Swara Bhaskar essays the single mother and high-school drop out Chanda Sahay with delightful positivity. Chanda is a woman who will go to any extent to educate her daughter Apu (Riya Shukla). Even enrolled in the same school even though she herself was  a high-school drop-out. The two don’t have an easy relationship and like any other teenager, Apu resents and misunderstands her mother’s attempts to steer her towards academics. But Chanda’s persistence pays off and a day comes when Apu is on the verge of a career in Civil Services and Chanda herself becomes a maths tutor.