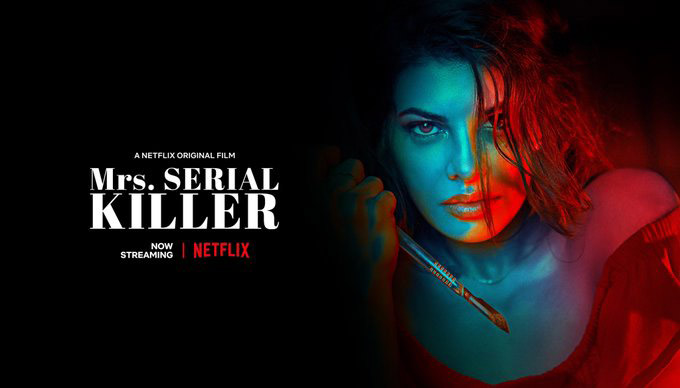 Mrs serial Killer is Farah Khan’s first production venture in eight years (after Joker), and Shirish Kunder’s first feature film in as much time. The film has the emotional complexity and the progressive attitude of an Ekta Kapoor serial. This Netflix original is a murder mystery revolving around a psychopath husband & wife.

The plot begins at someplace in Uttarakhand where Sona Mukherjee (Jacqueline Fernandez) lives with her husband Mrityunjoy Mukherjee (Manoj Bajpai). Some unwed but pregnant ladies are murdered, and the circumstantial evidences points towards Mrityunjoy. A vengeful inspector Imran Shahid (Mohit Raina) is handling the case, and it seems he wouldn’t stop chasing the truth easily.

Shirish Kunder is completely oblivious of the word `nuance` itself. Every dialogue, every note, every expression, and every step of a narrative thread is overplayed. There is no depth in any character and the story-telling. A lot of scenes end abruptly and that can be either due to bad writing or haste editing. The story fails to hold your attention.

Production designer Shashank Tere has also given a great deal of scope to create the spaces in which the action takes place. Even the dialogues were over the top, so you would not be able to stop yourself from laughing.

On the acting front, Jacqueline looked very promising in the trailer but thats not the case in the film as she needs to polish her acting skills. She is the eye candy here who does not succeed in saving the film. Even the dialogue delivery is very bad, at times she struck speaking Hindi.

Manoj Bajpayee is stellar as always and he doesn’t deserve this lame drama. The actor stands out even in this not-at-all exciting murder mystery. He is the only actor here who makes you feel his presence every second he is on screen, such flawless and natural is his performance.

Mohit Raina tries to run movie with his skills but bad story writing and direction fails him. An actor like Darshan Jariwala is completely wasted with just pa few scenes. Zayn Marie as a debutant still manages did justice to her performance.

Background music is good, which along with actings from the main characters succeeds in keeping you intrigued for some time. The music is top notch according to the scenario and situations.

And that’s the overall emotion that Mrs Serial Killer leaves you with. Not only does it disrespect your intelligence, it pretends for a brief time towards the end that it has been in on the joke all along. You can skip this if you are expecting a fantastic murder mystery because you will be disappointed.