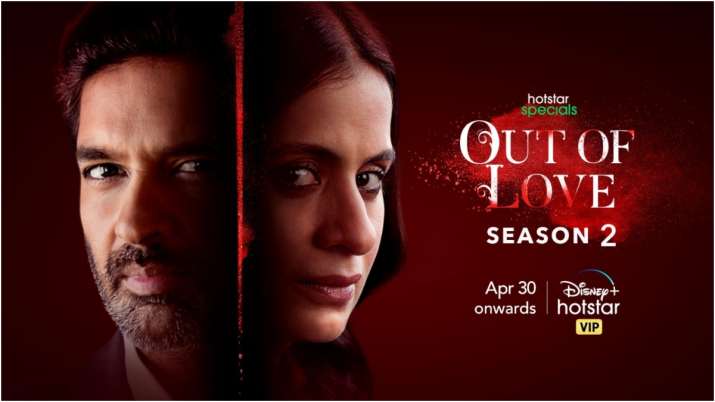 You know something is not right when the scenes are obscure, the grass is damp and the drumbeats pace up rhythmically. And if you have watched Out of Love season one, you probably know why things are ‘out of place’ here. Nevertheless, if you haven’t, you’ll get a basic premise in the hour-long first episode. Rasika Dugal and Purab Kohli are back as the estranged couple — Dr Meera and Mr Akarsh — from the first season, only to be more suspicious and spiteful.

Season 2 picks up the reigns three years after Meera and her son Abhishek were left behind by Akarsh in Conoor. The mother-son duo seems to have moved on from their struggle, living an amicable life. But their ‘happy time’ is short-lived. Akarsh decides to return to the town with his second wife and their daughter sending out invitations to all their common friends. Obviously, Meera is not at ease learning this. Why obvious? Because the makers pitch her awkwardness at the surface with a snap and Rasika gets into that territory in no time. Just like the previous season, Rasika is a force to reckon with. It is through her you know that something is dubious. She’s confused, stubborn, headstrong and helpless all at once. I guess that’s how good Rasika is. It is her silent screen appearances that draw you to this otherwise mundane drama.

Purab, on other hand, is surprising, but not in a good way. Based on the first two episodes, he sort of brings the energy of the entire show down. He’s supposed to be this vile and vicious man, but every time you see that dimple on his cheeks, he’s far away from being any wicked. However, he did shock everyone in the previous seasonal finale, never know what director Oni Sen has in store for him this time!

Talking about Sen, his treatment of the web show turns this family drama into a thriller. Over the shoulder shots, shadowy views and serving viewers a heightened feeling of anxiety all the time, make sure that you don’t miss a detail. Furthermore, this time he has opened the plot to the audience. In season two you have the freedom to pick sides. Whether you want to side a man who cheated his wife and returned only to destroy her life further, or you want to cheer for a woman who manipulates colleagues and friends to seek information about her son and ex-husband. Nobody will judge your preference.

In all, Out of Love 2 is a winner on technicalities but concept wise, it needs an upgrade from Doctor Foster, the series on which it is based. Judging a woman in 2021 for going to a party uninvited with his son’s music teacher to acquitting an infidel man who just made a pass at the woman he left three years ago is neither worthy on papers nor the screen or real life. It’s high time our narratives stop putting women on a pedestal.