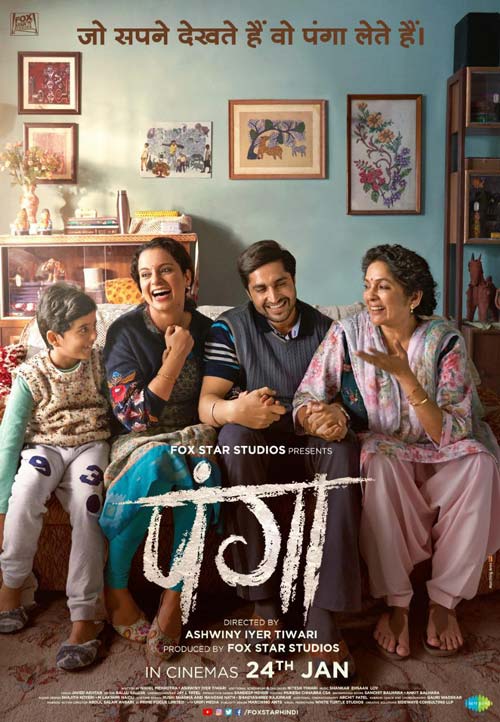 Panga Review: A fun and inspiring journey of a woman who takes ‘Panga’ with life!

India is a country where a woman is always looked at and glorified as a daughter, a wife, or a mother. Whether it is in the name of women empowerment or portraying her like a goddess she always has to struggle to get her own identity other than just being someone’s mother, daughter or wife.

Ashwiny Iyer Tiwari’s sports drama ‘Panga’ is about a woman who embarks on a journey to get her identity back and fulfill her dreams. Jaya Nigam (Kangana Ranaut) was once the captain of the Indian National Kabaddi Team in her youth but now her life revolves around her 7-year-old son Adi (Yagya Bhasin) her household responsibilities, a loving and caring husband Prashant (Jassie Gill) and her 9-5 job at the Indian Railways.

Jaya is a devoted mother and a wife who is happily married and satisfied with her life until one day her son Adi comes to know about his mother’s glory days as a National Kabaddi star and a champion and he wishes to see her play again. Her son’s wish is Jaya’s command and she stars playing just to make him happy but things then take an interesting turn.

This leads to Jaya realizing that Kabaddi is her real passion and that’s where her heart still is. Pushed by her son she decides to get back to the sport and win her glorious days back. What happens when a 32-year-old mother decides to get her spot back in the National Kabaddi Team after a break of 7 long years and does Jaya emerge victorious in her journey or not is the crux of this Kangna Ranaut film.

Director Ashwini Iyer Tiwari has proved her mettle in exploiting the small-town middle-class life setup in her previous films ‘Nil Battey Sannaata’ and ‘Bareily Ki Barfi’ and she does that again with perfection in Panga. Her story and its characters look so real and relatable that you feel like its not a film and you are actually watching all this unfold in real life.

The screenplay of the film hooks you up from the very beginning till the end without making you blink even once. The struggles a woman has to go through when she juggles between her responsibilities at home and her dreams are flawlessly perfect and the simplicity of the story and its characters makes it a pleasure to watch the film.

Ashwiny Iyer Tiwari and Nikhil Mehrohtra’s writing deserves all the praise for this and Nitesh Tiwari’s dialogues are remarkably on-point that bring in many delightful and humorous moments through the surreal lenses of the lifelike characters.

The performance front is extremely well handled by Kangana Ranaut, who is excellent like always and proves once again that she is the actual ‘Queen’ of Bollywood when it comes to acting and molding herself into any character given to her. She is the life of the film and is fantastic as the devoted and loving Jaya.

Richa Chadha is spectacularly good and gets into the depth of her character as Jaya’s headstrong friend Meenu and Neena Gupta steals the show as a typical Indian mother. Jassie Gill as Jaya’s supportive husband Prashant is adorable and his cute smile will make even your problems fade away.

Yagya Bhasin who makes his Bollywood debut as Jaya’s son Adi is amicable who provides some good comical moments. Shankar-Ehsaan-Loy’s music and Javed Akhtar’s lyrics work like a spell and provide some good support to the narrative.

In the end, Panga is a simple film describing some simple emotions. It highlights the efforts and sacrifices a woman makes for the ones she loves and celebrates them too but also tells you not to give up on your dreams. It is a fun, cheering and inspiring journey of a woman who doesn’t give up and takes a second chance, takes a ‘Panga’ as it is never too late to change ‘I could have been’ to ‘I am’. Must watch!