Panipat Review: The battle is lost! 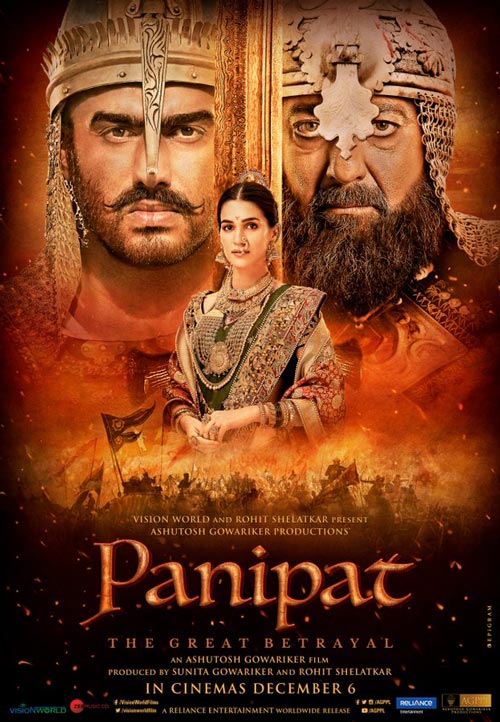 Ashutosh Gowarikar seems to be obsessed with history and historical dramas and Panipat is next in line with his obsession. As a director he has always had a more unbiased and simplistic approach towards the history which worked back in 2008 with ‘Jodha Akbar’ but unfortunately today, it seems not to be working.

Bollywood in recent years has seen films that took have taken the scale of historical drama a bit higher, be it Bhansali’s ‘Padmavati’ or Anurag Singh’s ‘Kesari’ and the audience now expects more than just simplicity and facts. ‘Panipat’ based on the ‘Third battle of Panipat’ that was fought between the Maratha forces against the Afghan invader Ahmad Shah Abdali, focuses on how the Maratha warrior ‘Sadashiv Rao Bhau’ (Arjun Kapoor) tries to ward off the Afghan ruler Ahmad Shah Abdali. The film presents the history and the facts with a simple and linear screenplay but fails to rouse the most important thing in a historical film i.e. ‘drama and emotions’ that actually make you feel the film.

The film starts when the Mughal empire was facing decline and Marathas were a major rising power in India. The film presents history and facts with great detail and perfection but fails on the emotions part.

Panipat could have proved to be a great historical-war drama had the director focused mostly on Sadashiv and Abdali but the film keeps wandering in an attempt to present everything in front of you making it feel more like a documentary rather than an entertaining film.

The film has great and larger than life battle scenes with praiseworthy quality but without the emotion and the dramatic feel to support that the film turns into a plain and bland ride. The film becomes gripping later in the second half but till the time it does that the viewer loses interest.

The writers have failed to present the history with an effective dramatical way that entertains and leaves an impact on you. Ashutosh Gowarikar has treated the film like any other Bollywood masala film in terms of music as Panipat has many songs pop-up just like that for no reason breaking the pace of the screenplay and slowing down the narrative ending up frustrating the viewer.

The director had many great actors like including Sanjay Dutt, Mohnish Bahl, Padmini Kolhapure, Zeenat Aman, Suhasini Mulay, Kunal Kapoor and many more at his disposal but couldn’t utilize them to their potential.

They do try their best but the only one who impresses you and gives you your money back is Sanjay Dutt as Ahmed Shah Abdali. His hefty screen presence captures the entire screen whenever he is there. He makes up for a marvelous villain and leaves his impression on you.

Arjun Kapoor as Sadashiv Rao and Kriti Sanon as Parvati Bai fail to live up to the expectations despite trying hard. Arjun Kapoor’s character lacks energy and life and Kriti’s Parvati Bai doesn’t have much to do here and so goes for every other actor.

Overall, Ashutosh Gowarikar’s Panipat attempted to be a historical epic but all the attempts go futile and nothing can be done about that now as the battle is lost.