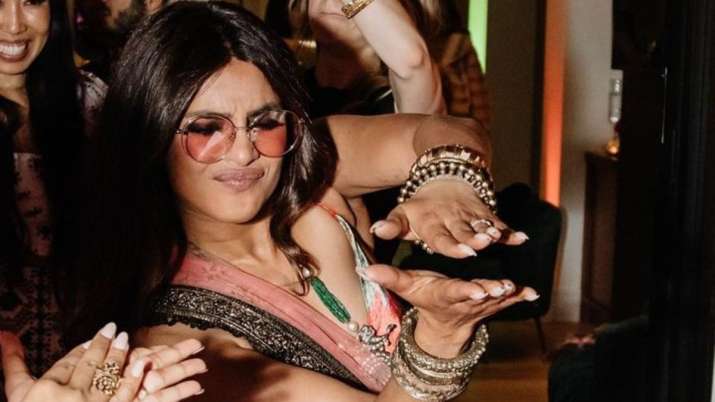 “Thumka laga ke she’ll rock your world… My desi girl!”Priyanka Chopra made us believe in it when she danced to the popular song from Dostana (2008). Even after decades, the world believes it and she has become the “OG Desi Girl” globally. Living up to the tag, the actress, who was recently spotted at YouTube star Lilly Singh’s Diwali bash, was seen dancing her heart out. Wearing a festive outfit, PeeCee danced like there’s no tomorrow and pictures of her doing the bhangra wearing rose-tinted glasses have gone viral on the Internet.

Lilly, who shared the pictures on her Instagram account posted some candid shots of PeeCee and more celebs including Tesher, Kal Penn and the team of popular teen drama Never Have I Ever — Mindy Kaling, Poorna Jagannathan and Richa Moorjani. Lilly shared the photos writing, “Last night was a movie. Love & Light with the Desi squad. Honoured to be surrounded by such incredible people. And then get lit with them. And then wild out with them. And then have senti talks with them. And then watch them WIN. I’m going to have to make this an annual thing.”

A video of Priyanka dancing with Lilly is also viral on social media. In the video, she can be seen dancing on the peppy beats with Lilly Singh. Watch here:

Priyanka too gave a glimpse of the fun evening. She took to her Instagram to share a few pictures of herself from the party. She captioned the picture as, “What makes Lilly SINGH the perfect host and dost? She’s a fellow PUNJABI. What an epic end to this year’s Diwali celebrations! Thank you @lilly for such an amazing evening!”

Here are more pictures and videos from the celebrations!

For the event, the actress chose a retro look. She donned a short top paired with palazzos in floral patterns designed by ace designer Sabyasachi Mukherjee. She rounded up her look with a stole, eyegear, oxidized silver jewellery and open tresses.

On the work front, Priyanka has an interesting slate of projects that include American romantic drama titled ‘Text for You’, Patrick Moran and the Russo brothers’ ‘Citadel’, the film adaptation of ‘Cowboy Ninja Viking’ where she is set to star opposite Chris Pratt. Apart from this, she will also be seen along withKatrina and Alia in Farhan Akhtar’s ‘Jee Le Zaraa’.