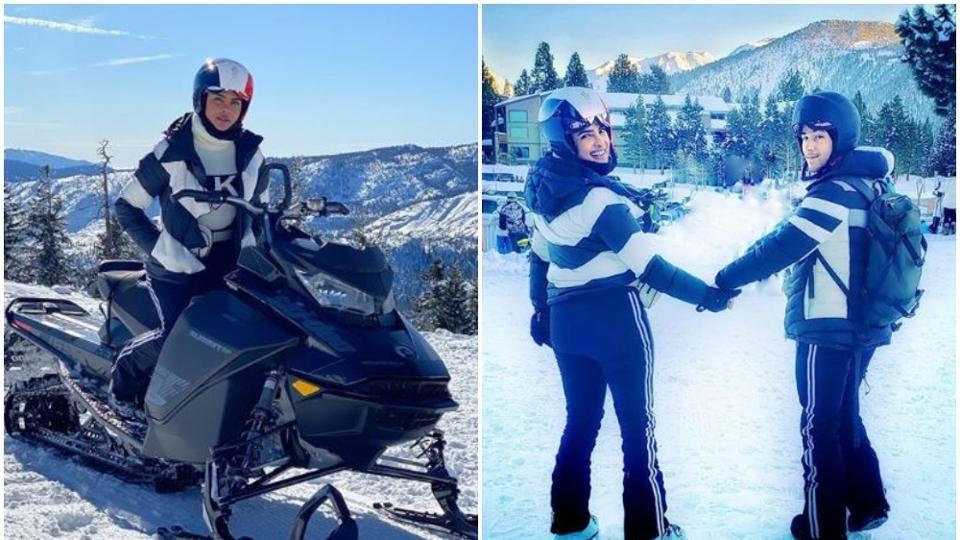 Priyanka Chopra and Nick Jonas were holidaying in the snow-capped mountains of California around Christmas. See their latest pictures here.

As the year 2019 draws to a close, Priyanka Chopra and her singer husband Nick Jonas are holidaying in the snow-capped Mammoth Mountains of California, USA.

Sharing a picture with Nick, in which they are both sporting similar clothes, Priyanka wrote: “Bye winter wonderland.. you will be missed. See you in 2020 #twinning #twinningiswinning” In the picture, while both have their backs to the camera, they also turning partially to look at the photographer. Both are clad for snow; in black and white track suits, helmets and snow boots.

Priyanka also shared pictures of herself on a snow bike. Calling it her ‘mean machine’, she wrote: “Me and my mean machine.. somewhere over the rainbow..” In two of the pictures, she is seated on the bike, in complete gear. In the third, she is standing next to it, with two other people. One of them appears to be her brother Siddharth.

Earlier, the couple celebrated Christmas along with family, including Priyanka’s mom Dr Madhu Chopra, brother Siddharth and her crew members. Sharing a picture with Nick, posing in front of a Christmas tree, she had written: “It’s the happiest Christmas. From ours to yours. Merry Christmas.” In another video clip, she had shared, Priyanka is sitting on what she called ‘bat mobile’ and had written: “Santa drove in on my bat mobile!! Aaaah! My husband knows me so well! Thank you baby. I love you! #christmas”

Priyanka and Nick got married in December, 2018. They held two ceremonies in Jodhpur, India – one Hindu and another Christian, in keeping with each other’s traditions. Speaking about how they have made their marriage work despite busy schedules, Priyanka had told Hindustan Times, “We have a rule. Nick and I don’t go beyond two-three weeks without seeing each other. Wherever in the world we are, we keep in touch, and video call all the time! It’s important to make the effort to have the other person involved in your life. We do that.”