Radhika Apte looks alluring as she poses with her nomination medal of International Emmy Awards! 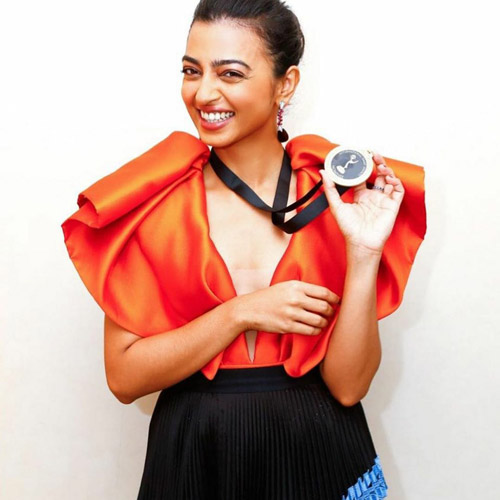 Indie Star Radhika Apte is having a proud moment now as she has won a nomination medal at International Emmy Awards,2019.

Apart from winning the medal, Radhika has also made heads turn with her latest outfit which she had donned yesterday.

Radhika Apte has posted an image of hers in an orange outfit and captioned it by writing,”❤ thank you @iemmys 🥰”

In the picture, Radhika is seen wearing an orange Edgy V-neck top and classy black skirt which just added to her classy and elegant look.

The actress has completed her look with black long earrings and hair tightly pulled back in a bun.

Radhika’s million dollar smile will further leave everyone captivated as she flaunts her medal in the picture.

The talented actress has surely entranced her fans with her uber-cool and glamorous avatar at the global award function.

Radhika Apte has been nominated yesterday, for her incredible performance in ‘Lust Stories’ at International Emmy Awards,2019.

After her films ‘Andhadhun’ and ‘Padman’ won big at National awards, the actress has now added another feature to her cap is a proof of her versatility in every genre.

Radhika Apte will be next seen in the film ‘Raat Akeli Hai’ alongside Nawazuddin Siddiqui for which the actress has already finished the first schedule shoot in Lucknow. Fans can’t wait to see what she has to offer with these new exciting projects and roles. With everything on a roll, we are totally rooting for Radhika to shine at the Emmys!