Retro cult at alpine location, Kriti does it all 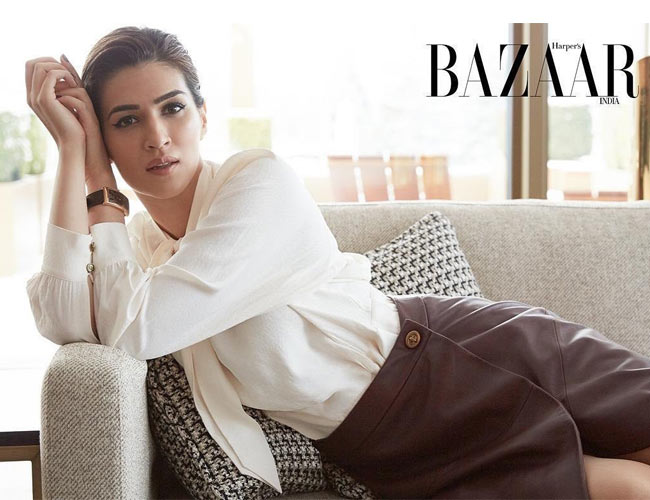 Kriti Sanon recently did a photoshoot for Harper’s Bazaar India, in Switzerland for its first issue of 2020. The actress looks extremely hypnotic in the mix match fusion of retro and formal, be it a jacket with a shirt, tie, and pants or dress shirt with a side flap pants. The diva looks vivacious with the sissy winged eyeliner, bold eyebrows, and nude makeup but the highlight of the shoot are the elegant watches that the actress paired with her outfits and the retro cross body sling bags stealing the show.

The shoot is literally an eye candy since it is shot in such exotic locations of Switzerland and some aesthetic interiors. The Swiss Alps builds up the winter vibe of each outfit that the diva carries with so much poise. The color scheme of the garments is very English with blues, browns, and whites and her hair is sleek, side-parted and tied back to reflect a passive face with slight sass. Check it out –

Kriti was last seen in Ashutosh Gowarikar’s epic war film Panipat along with Arjun Kapoor, Sanjay Dutt, Mohnish Bahl, Padmini Kolhapuri and Zeenat Aman and she will next be seen in Laxman Utekar’s drama movie Mimi along with Pankaj Tripathi and Sai Tamhankar.

The movie is her first female-centric film with Pankaj Tripathi where she’ll be playing the role of a surrogate mother. Mimi is the Hindi remake of Samrouddhi Porey’s National award-winning Marathi film ‘Mala Aai Vhhaychy’. Produced by Dinesh Vijan the release of Mimi has not yet been finalized.