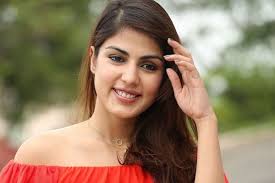 Actor Rhea Chakraborty was spotted at the Santacruz police station in Mumbai on Thursday. She was granted bail by the Bombay High Court in the death case of her late boyfriend, Sushant Singh Rajput on Wednesday. The actor was arrested on September 9 on drugs-related charges linked to Sushant’s death. While granting a reprieve to Rhea, the court had asked her to mark attendance at the nearest police station for 10 days.

The court said she was not part of any drug syndicate and had no criminal record. It said Chakraborty could not have financed or supported illegal drug trafficking as alleged by the Narcotics Control Bureau, which has launched parallel investigation in the case along with the Central Bureau of Investigation and the Enforcement Directorate.

The 28-year-old actor’s lawyer, Satish Maneshinde, said her arrest was “totally unwarranted and beyond the reach of law.” Chakraborty’s brother, who was arrested in the same case and has also denied the charges, however, remains in custody.

Rhea at the Santacruz police station.

Rhea at the Santacruz police station.

Rhea was granted bail on Wednesday.

Rajput’s suicide in June initially triggered a debate over mental health. But his family disputed reports that he suffered from mental illness and lodged a police complaint accusing Rhea of abetment of suicide. She has denied the allegation.

Also read: Bobby Deol says Shekhar Kapur quit Barsaat after 27 days, left him frustrated; dad Dharmendra had to step in to save the day

Earlier this week, a panel of doctors examining Rajput’s autopsy reports at the All India Institute of Medical Sciences, a leading public hospital in New Delhi, submitted a report to the Central Bureau of Investigation that reportedly ruled out murder as a cause of the actor’s death.