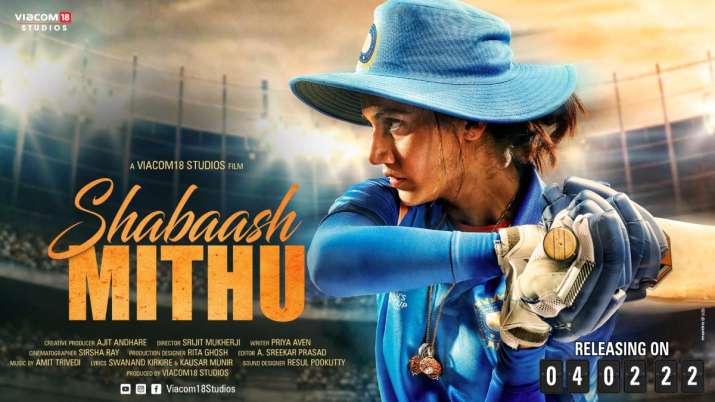 Cinema and cricket are two of the biggest influencers in the life of Indians across the world.  One can only then imagine the fervor when the studio behind National Award-winning sports biopics like Bhaag Milkha Bhaag and Mary Kom creates a film on the life of legendary cricketer Mithali Raj – captain of Team India Women’s ODI. Marking Mithali’s birthday, Viacom18 Studios today announced the release date for Shabaash Mithu. The Taapsee Pannu starrer is all set to hit the screens worldwide on 4th February, 2022.

Shabaash Mithu is the coming-of-age tale of women’s cricket in India as witnessed by the most successful woman cricketer the country has ever seen. The film chronicles the highs and lows, setbacks and moments of euphoria of Mithali’s life with Taapsee Pannu essaying the titular role. Also seen in the film will be the talented actor Vijay Raaz in a key role.

Viacom 18 studios shared the same on Twitter and wrote, “ONE GIRL with HER CRICKET BAT has shattered world records and stereotypes. You’ve done it all Champ… Happy Birthday Mithu @M_Raj03 #ShabaashMithu in theatres on 4|02|2022.”

Shabaash Mithu has been shot across domestic and international locations to aptly bring alive Mithali’s iconic journey and her meteoric rise to the world stage. Produced by Viacom18 Studios, Shabaash Mithu’s Creative Producer is Ajit Andhare, while the film is Directed by Srijit Mukherji and Written by Priya Aven.