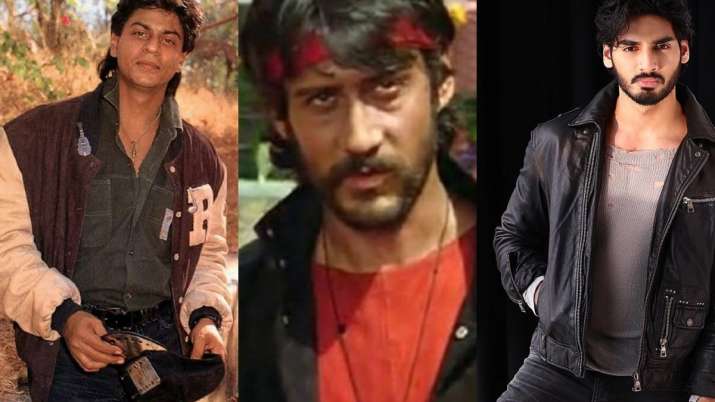 The Bollywood Industry is known for its versatile and talented actors who have been winning the audience with their diverse roles. With emerging mediums, the industry is looking at a number of new debutants this season. Suniel Shetty’s son, Ahan Shetty is also one of the. He will be making his Bollywood debut in the upcoming Sajid Nadiadwala film ‘Tadap’. By the trailer, it appears that the actor will be making his on-screen debut by playing a rebel. Going back to the older times, there is a long list of superstars who had started their on-screen journey as rebels. Here are a few of the top stars who gained success from their on-screen debut as rebels:

The King of Romance, Shah Rukh Khan, has been in the film industry for close to three decades now. From his debut in 1992 with Deewana to his last film Zero among many other superhits, Shah Rukh has always graced the silver screen and has won hearts across the world. He started with Deewana alongside Rishi Kapoor, and his popularity has just been on the rise ever since then. Shah Rukh has really rejoiced the audience with his subversive character, which is quite visible in the film. It’s only after the movie ‘Deewana’ that he gained mega success and gradually became the King of Bollywood carrying multiple big projects on his shoulders all by himself. Even today, the excitement that SRK incites among his fans is unlike any other.

Jackie Shroff is one of the most popular Indian celebrities to have caught the eye of filmmakers with his exuberant performance in his notable films. Having worked in over 250 odd projects in the past four decades, the actor has performed as a rebel in many of them. Jackie was touted as Bollywood’s new big thing when he made a blockbuster debut as a lead actor in the film ‘Hero’. Through the decades he roared on the silver screens as a rebel in films like Ram Lakhan, Karma, Tridev, Kala Bazaar among others. He, as a superstar has had taken the rough with the smooth journey since his inception, and has gained stardom for all right reasons.

It was more than a decade before when Bollywood found it’s yet another true raw action hero, Ajay Devgan. Flaunting his agility and toughness, the actor made his debut as a rebel with ‘Phool Aur Kaante’. The film has been a stepping stone in his career as it led to another series of projects which helped Ajay rise as a superstar of that era, solidifying his career and earning him all the success and popularity that he truly deserved. Ajay, now, has a massive fan-following and is famously known for his intriguing stunt poses in his films.

With heavy-duty and insurgent action sequences in all the films, Tiger Shroff has come a long way as an authentic action hero. He is one of the youngest actors to make his on-screen debut as a rebel with Heropanti followed by Baaghi and The Flying Jatt, all crafted on the same template that the actor is perfectly good at – stunts, action scenes and dance. Interestingly, Tiger’s fame has quickly climbed the stairs of success establishing a new name in B-Town, and is now touted as the first true action hero of the millennial generation.

Beloved superstar Prabhas has carved a niche for himself in the action and rom-com space. The Pan-India celebrity who is known for his intense side in stupendous action films such as Baahubali, made his debut as a rebel in the year 2002 with the Telugu action-drama ‘Eshwar’. The ‘Darling’ actor rose to prominence with his performance in the films he has had been roped in ever since the beginning. The actor emerged as a true rebel star after his first film and still garners myriads of praises and applause from the audience for his versatile on-screen portrayal.