Sikh paramedic who can’t wear beard on the job 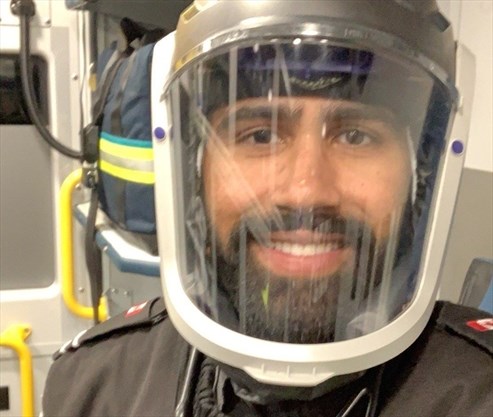 At one time, the Hamilton medic was given option of shaving two lines into his beard to fit respirator

If, perish the thought, you found yourself in such crisis as to need ambulance help in Hamilton, you’d first have to somehow make your way to Peel for Hamilton paramedic Harkarn Sihota to do the job.

Because of his beard, or in spite of it, depending on how you look at it, he is allowed to work on-road as a paramedic in Brampton or Mississauga, but not here in Hamilton, where, capable as he is, Sihota was put on modified duty and then, since February, on leave of absence.

It’s a case of, forgive the wordplay, splitting facial hairs. Quite literally — at one point Sihota, a Sikh, was asked to consider the option of shaving two lines through his beard so his respirator mask could “seal” better.

Yes, he turned down that option.

The City of Hamilton’s paramedic service, for which Sihota has been working since 2016, went to the provincial government in 2018 seeking an exemption for him from using certain headgear in order to accommodate his religious beliefs, which involve the wearing of a beard.

The Ministry of Health refused several times, upon repeated requests, to make an exception, citing the ministry’s equipment standards for paramedics, which forbid the wearing of a beard.

“This has been going on for two years now,” says Sihota. “I finished paramedic training in 2016 and Hamilton was the first city to offer me a job.” He started in June of 2016 but the beard violation “was brought to the surface in January of 2018.”

Since then it has been a source of mounting frustration for him. First, he was put on modified duty, which meant no ambulance response work, while the city awaited word from the ministry.

When the pleas for exemption failed, his union (OPSEU Local 256 in Hamilton) grieved. While waiting upon that, Sihota was given three options, he says.

“One was to move to a different city department, like public works, but I didn’t go to school for public works.