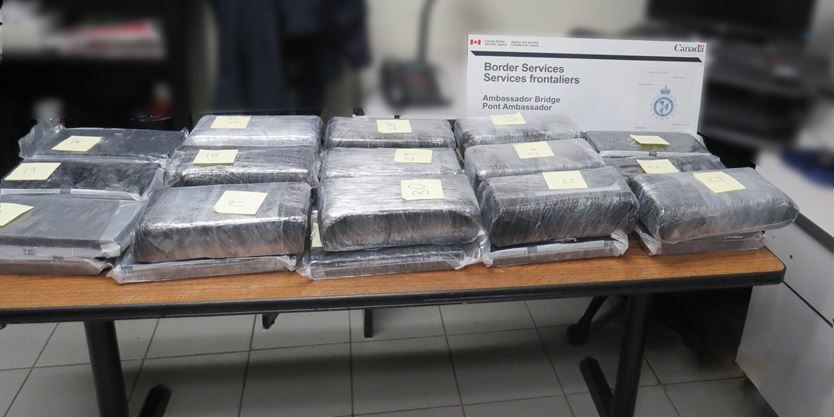 ‘Stopping the smuggling’: Brampton trucker accused of having 40 kg of cocaine in his vehicle

RCMP and Canada Border Services Agency charged a Brampton trucker after seizing 30 bricks of suspected cocaine at the Ambassador Bridge in Windsor on Dec. 19. – CBSA photo

A Brampton man is facing charges after he was caught with 30 bricks of suspected cocaine at the U.S.-Canada border.

On Dec. 15, Canada Border and Services Agency (CBSA)– Southern Ontario Region, along with RCMP’s Windsor detachment seized 30 bricks of suspected cocaine at Ambassador Bridge and arrested a 44-year-old Brampton trucker. At the time, the lone man was driving a tractor trailer and arrived at the bridge’s commercial operations in Windsor before being referred for a secondary inspection.

Officers arrested the driver and seized the suspected cocaine. The RCMP took custody of the accused and the evidence.

“Stopping the smuggling of narcotics across Canadian borders is a priority for the CBSA,” CBSA district director Joe McMahon said. “I want to congratulate the CBSA officers who work tirelessly every day to keep our communities safe alongside its law enforcement partner, the RCMP.”

Manjinder Gill, 44, of Brampton, is charged with importation of a controlled substance and possession for the purpose of trafficking.

He is currently in custody awaiting a bail hearing.

The investigation is ongoing.