Street Dancer Review: All that glitters in this dancing delight is actually gold 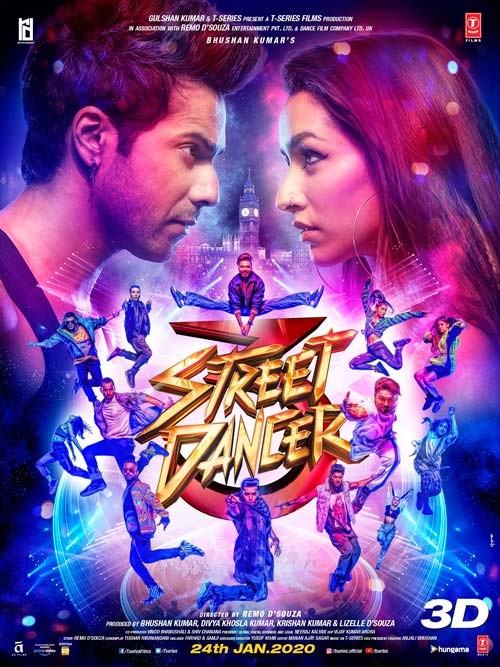 Street Dancer Review: All that glitters in this dancing delight is actually gold

The dance genre was given a life in Bollywood by Remo D’Souza when the choreographer ventured into direction with his 2013 film ‘ABCD’. The genre was taken to the next level with ABCG’s 2015 sequel ‘ABCD 2’ and now with Street Dancer 3D, Remo D’Souza has gone full throttle. Yep! That’s what this film is, a full-throttle glittering and dancing piece of entertainment.

Street Dancer 3D is about two professional and passionate dancers living in London, Sahej (Varun Dhawan) an Indian origin guy and Inayat (Shraddha Kapoor) a Pakistani origin girl. Both these guys happen to be the leaders of their respective dance troupes and are arch-rivals wanting to defeat each other every chance they get. How their lives change completely and how Sahej’s ‘Street Dancers’ and Inayat’s ‘Rule Breakers’ eventually put their rivalry behind and come together for a cause far greater than them forms the rest of the story of the film.

The one thing that comes to mind when you think about a Bollywood dance film is the script, which was average in Remo’s previous films but this one fares far better in that department and the film has enough meat to keep your eyes hooked to the screen. From the fights on an India-Pakistan cricket match to highlighting the plight of illegal South Asian immigrants in London, the screenplay has an ample amount of drama and emotions.

The story has some over-dramatic and predictable points but the best part, the dance will make you forget that. Yes! It is that awesome, combined with breathtaking VFX and the technical prowess, Remo D’Souza’s film scores A+ in the department of dance which sets the screen on fire and apparently, in this film, all that glitters is actually gold.

Varun Dhawan and Shraddha Kapoor’s on-screen chemistry is great as always and the hard work they have done to improve their dance skills has paid off which is clearly visible in every frame of the film. They don’t just shine in their characters but also equally succeed in matching the energy of the professional dancers accompanying them in the film which is really impressive.

Shraddha Kapoor’s proud Inayat is super likable and her flawless dance moves make you fall in love with the character. Varun Dhawan too shines as the pure-heartedly innocent Sehaj and he moves effortlessly when the time comes to groove.

Nora Fatehi as Sehaj’s girlfriend Mia is a burning delight and her energy is just unmatchable. Her dance skills are excellent which she has proved already with so many hit item numbers in her bucket but here she is just top-notch and delivers a noteworthy performance.

Prabhu Deva stays low throughout the first half and most of the second half but once he shakes his leg, it is an exotic treat for the eyes and you can’t move them off the man. Aparshakti Khurana is a performer like always and the supporting cast of the film including Raghav Juyal, Caroline Wilde, Salman Yusuff Khan, Dharmesh Yelande, Sushant Pujari, and others are convincingly good in their parts too.

Choreography and cinematography are one of the most crucial elements of a dance film and Rahul Shetty’s and Vijay Kumar Arora’s work here shines on-screen in all its glory.

The music of the film is a mix of everything, you get Badshah, Guru Randhawa, Sachin-Jigar and many others. Sachin-Jigar’s background score enhances the energy and feel of the film and the music impresses too. ‘Muqabla’ is undoubtedly the best one that turns the whistles on. ‘Garmi’ by Badshah turns the heat on, ‘Lahore’ and ‘Illegal Weapon’ bring in the Punjabi pep and ‘Mile Sur Mera Tumhara’ gives you goosebumps.

Overall, if you love to dance and the dance genre, you are going to love this one provided you ignore the cliched plotline and some predictable story points and If you are just looking for a normal Bollywood entertainer, this one will not disappoint you and might even make you want to shake a leg to its beats.