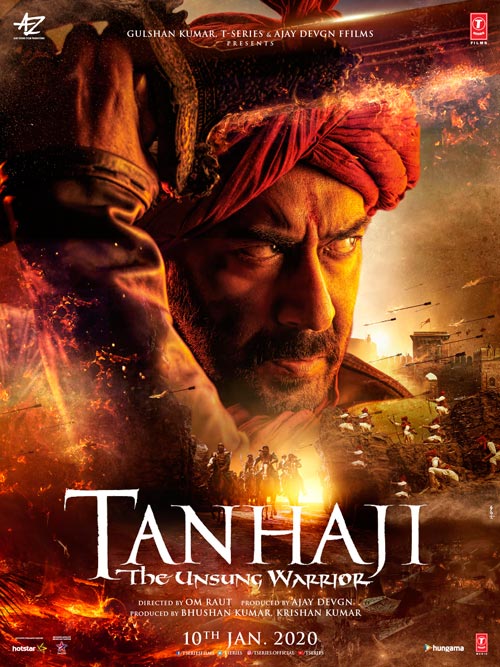 Tanhaji is set in the 17th century where Chhatrapati Shivaji Maharaj (Sharad Kelkar) is forced to give away many of the forts held by the Marathas to Mughal Emperor Aurangzeb (Luke Kenny) under the Treaty of Purandar which included the strategically crucial Kondhana fort (now Sinhagad).

But Chhatrapati Shivaji’s mother Rajmata Jijabai (Padmavati Rao) takes a vow to walk barefoot till the day the fort of Kondhana is recaptured by the Marathas. Four years pass and Aurangzeb decides to send his best commander Udaybhan Rathod (Saif Ali Khan) with a large infantry and a huge canon known as ‘Naagin’, to make sure the fort does not go into Chhatrapati Shivaji’s hands once again.

To lead the Maratha army Shivaji Maharaj reluctantly sends his most trusted lieutenant Subedar Tanhaji Malusare (Ajay Devgan) who puts behind his son’s wedding and begins his quest to win Kondhana back. Tanhaji and his Maratha Gorilla warriors manage to break in the fort and a great battle ensues between the Marathas lead by Tanhaji and the Mughal army led by the brutal and barbaric Udaybhan Rathod forming the crux of this Om Raut directorial.

By watching the film, it is impossible to tell that it is the debut directorial film of Om Raut. He is surprisingly good although he has taken some liberties in storytelling but it is worth it. His direction is top-notch and so is the cinematography, camera work, VFX and everything else. The exquisite action and stunt scenes are the life of this epic war-drama that are shot brilliantly making them appear life-like and the 3D version is just the cherry on top.

The screenplay of the film is kept tight by Prakash Kapadia and Om Raut and at no point, the director loses his grip on the story. The narrative has a perfectly balanced amount of drama, emotions, and action to keep you on the edge of your seat.

On the performance front, Ajay Devgn as the fearless and devoted Maratha warrior ‘Tanhaji Malusare’ delivers outstanding performance which can be said as one of his best to date. He portrays the patriotism and passion of the Marathas with might and his fight scenes are a treat for the eyes but the real USP of the film is Saif Ali Khan as the evil Mughal commander Udaybhan Rathod. He is spectacular as a relentless and ferocious fighter with a mischievous smile on his face destroying everything that comes his way delivering a standout performance. It won’t be a surprise if he is nominated for or even wins a Filmfare or a National film award for this one.

Kajol as Tanhaji’s wife and his inner strength Savitribai is superb as always in her limited screen time and its great to watch the Ajay and her sharing the screen playing husband and wife after so long. Sharad Kelkar as Chhatrapati Shivaji Maharaj is good enough and presents the character with dignity.

Sandeep Shirodkar’s background score deserves a special mention here which is bang on and adds to the cinematic thrill and enhances the feel of the film making it a complete delight.

All in all, Om Raut’s ‘Tanhaji: The Unsung Warrior’ is high on adrenaline with marvelous action, standout performances, and breathtaking visual effects. The film tells a saga that no one told us living up to its title ‘The Unsung Warrior’. Must watch!