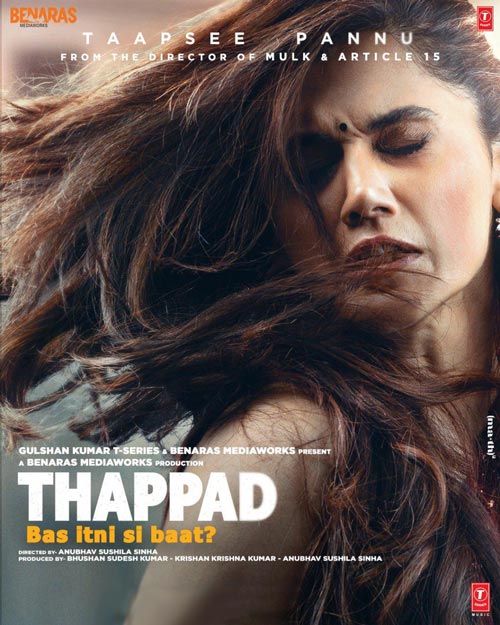 Thappad Trailer: A Hard-hitting and thought-provoking take on domestic violence!

The first look poster of Anubhav Sinha’s Thappad yesterday had taken the internet by a storm where Taapsee’s agitated mien truly gave away a strong message, `Thappad: Bas itni si baat?`. The makers of the film have released the trailer today and it is definitely the most hard-hitting and thought-provoking film of the year.

Gulshan Kumar, T-Series and Benaras Mediaworks Production Presenting the official trailer for the upcoming bollywood movie of 2020 – âThappad’. The film is D…

1,526 people are talking about this

The trailer captures the journey of a woman, role essayed by Taapsee who fights for justice after a domestic violence attack by her husband. Giving a strong message with promising performances, the trailer is definitely a must watch.

Touted to be a film which is this year’s Pink, Thappad is all set to continue the league of highlighting gut-wrenching subjects. Anubhav Sinha’s Article 15 is one critically acclaimed film and was inspired by real-life events. The film will be releasing on the 28th of February and is creating all the roar already.

The movie, Thappad has a talented ensemble cast of Taapsee Pannu, Ratna Pathak Shah, Manav Kaul, Dia Mirza, Tanvi Azmi, and Ram Kapoor and is already looking promising with the trailer of the film out now.

After achieving critical and box Office success with Article15, Anubhav Sinha is back with another film, Thappad produced by Anubhav Sinha and Bhushan Kumar starring Taapsee Pannu will release on 28 February 2020