The Sky is Pink Review 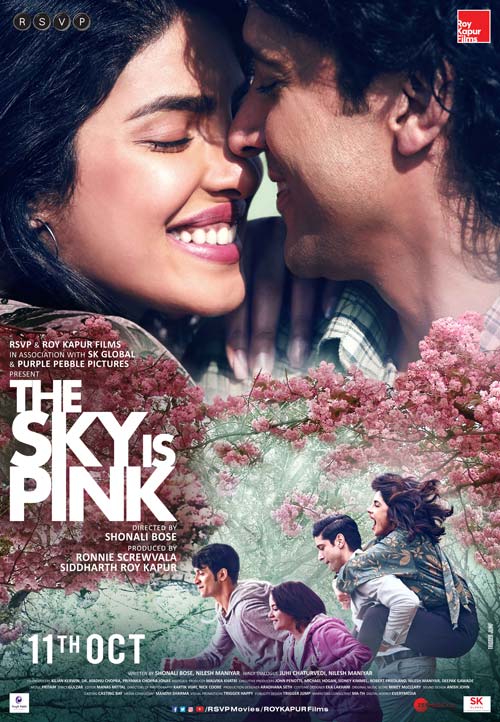 The Sky is Pink Review: An extraordinary journey of a family and their supergirl!

New Delhi, 2015, the film opens with a night shot outside the Chaudhary family’s residence. A sleepless Aditi (Priyanka Chopra) gets up and goes to her daughter Aisha’s (Zaira Wasim) room as she misses her, Niren (Farhan Akhtar) finds Aditi missing on his bedside and follows her into Aisha’s room to find her lying on Aisha’s bed, seeing her in pain, a grief-stricken Niren goes to the living room and starts watching the TV.

The Sky is Pink is inspired by the real-life journey of a young Indian author and motivational speaker, Aisha Chaudhary.

When the film starts, Aisha is already dead. The film moves between the past and the present through Aisha’s perspective who narrates the story of Aditi and Niren falling in love, getting married and how Aisha was born with a serious medical condition, SCID (Severe Combined Immune Deficiency)

The film is high on emotional quotient from the start with some comic elements in between. Niren and Aditi’s story takes an intense turn because of the deadly disease which requires their newborn daughter to get a bone marrow transplant so that she can live. Everything goes well and Aisha grows up to be a witty and funny teenager.

But the happy clouds soon disappear as Aisha collapses one day on a festive gathering and the family discovers that the transplant a newborn Aisha had, has resulted in her developing another rare incurable disease ‘Pulmonary Fibrosis’ and she has merely 5 years to live.

Aisha now has to decide whether she wants to get a lung transplant or not, which may extend her life by 10 years. She refuses and starts an emotional and extraordinary journey of a family that tries their best to make the rest of Aisha’s life the best she can have, rather than just going down hopeless and despaired.

The sky is pink is not a typical melodramatic Bollywood film. It touches your heart and makes you appreciate life and look at whatever it has to offer you, from a different perspective. It is national award-winning director Shonali Bose’s emotional and fun-filled take on the journey called life.

The direction is just fine and Shonali Bose proves why she is a national award winner, the screenplay could have been a little shorter as it feels dragged at some points but the emotional angle combined with the fun elements makes up for a warm and moving cinematic experience.

The sky is pink reminds us of the famous Bollywood dialogue of Rajesh Khanna, ‘Babumoshaay, Zindagi Lambi Hi Nahin, Badi Bhi Honi Chahiye’ which is clearly true in the case of Aisha, who believes in living a happy life with no regrets.

Every actor is tailor-made for their respective roles here. Be it Priyanka, Farhan, Rohit or Zaira, all of them can be seen breathing in their characters, and as the movie goes on, you feel them and their emotions along which is actually very moving.

Priyanka Chopra has put her heart in the role of Aditi, a mother who is just determined to make her daughter’s every second of life count. Farhan Akhtar as a loving father and a supporting husband does a commendable job and his and Priyanka’s chemistry is awesome.

Zaira Wasim as Aisha is cheerful and lovable, her character is full life and Rohit Saraf as Aisha’s brother ‘Ishan’ and partner in crime is perfect in his character. Most importantly the brother-sister chemistry is simply amazing here.

The music is nice and compatible with the storyline, the song ‘Dil hi To Hai’ picturized on Niren and Aditi’s romance is melodious and a delightful one.

The climax is high on sentiments. In the end credits, the film introduces us to the real supergirl Aisha Chaudhary and her journey with a background song composed by the real-life ‘Ishan’, who is a musician now as Aisha is seen speaking in TED talks about life and happiness.

Aisha’s pet’s name ‘Rolo’ defines the film in one word, or should we say, ‘Ro – Lo’, because the film will make you cry, so make sure you do carry a handkerchief especially if you are a woman.

Overall, the Chaudhary family’s story deserves a watch and it is a heart-melting one. Their journey, with all its ups and downs, happiness and sadness and the determination to make each and every breath count, will stay with you even after you leave the theater and do stay till the end credits roll, it is worth it.