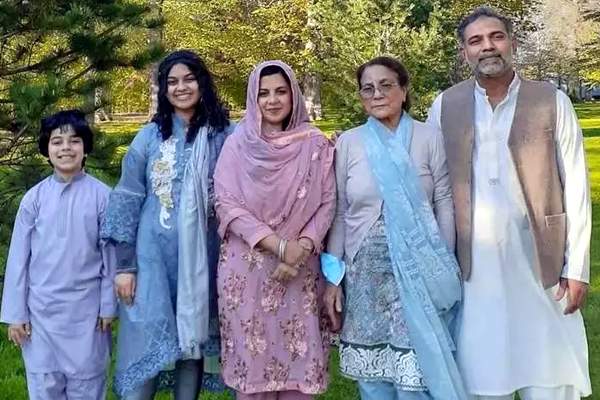 A vigil was held for the Muslim family police say were targeted in a violent attack that left a nine-year-old boy in hospital and his sister, parents and grandmother dead in London, Ont.

The vigil started shortly after 7 p.m. outside of the London Muslim Mosque and lasted around two hours, filled with prayers and calls for action against Islamophobia.

“I’ve walked that trail that our London family walked on Sunday and never got to finish. And just like many of my friends and family have expressed to each other and on social media, it’s not a matter that it could have been me, it was one of us,” said Nusaiba Al-Azem, second vice-chair of the London Muslim Mosque.

“I am from London,” said Bilal Rahhal, chair of the London Muslim Mosque.

“This city is my city, and this country is my country, as it is your city and your country. Never allow anyone to think otherwise because of the colour of your skin, your faith, or where you’re born. This is our city and we’re not going to let hate scare us or intimidate us or divide us.”

“But we need to recognize that we belong here. This is our city and we’re not going anywhere,” he said.

“We believe the victims were targeted because of their Islamic faith,” Chief Steve Williams said during a news conference.

The family has identified them as Salman Afzaal, 46, his 44-year-old wife Madiha Salman, their 15-year-old daughter Yumna Afzaal and Afzaal’s 74-year-old mother.

“There are no words that can ease the grief of three generations murdered in their neighbourhood,” Prime Minister Justin Trudeau said at the vigil.

Ford said earlier Tuesday that the government was working with the local health unit to temporarily ease COVID-19 restrictions to allow for people to gather at the vigil.

“What happened here in London is a tragedy beyond words. Three generations of one family taken in a senseless act of hatred and violence,” Ford said at the event.

Ford thanked the first responders and community members who rushed to the scene of the attack.

“Thank you for your bravery and your selflessness,” he said.

“We were left trying to understand how this could happen in a beautiful country and a beautiful province like Ontario. We know only that this awful crime was motivated purely by hatred and racism …

“It was a hate crime. It was an act of terrorism against a family targeted for their beliefs and for their religion. This type of racism and terrorism cannot and will not be tolerated. We must stand united against it.”

As volunteers handed out bottled water to help deal with the heat, several of Yumna’s close friends stood in the centre of the crowd, which stretched more than a city block. They carried signs that read simply, “She was our friend.”

Hateem Amin, 14, who became friendly with the Grade 9 student six years ago, said she was grateful so many people had come to show their support for the victims.

“She’s loved by so many people,” Amin said.

Singh used his speech at the event to encourage Canadians to not be afraid when they go out in public.

“This act of terror was committed with the purpose of driving fear into the hearts of the Muslim community,” he said.

“So I want to say to my sisters that wear a hijab, to my brothers that wrap their head: we will not cower in fear. We will wear our hijabs, our turbans with pride because we are proud of who we are. We will not let terror win.”

“We have to commit ourselves to working across party lines with premiers, with mayors, with faith leaders to end the kind of violence and hatred that took these lives,” O’Toole said.

Sana Yasir, a friend of the family who lived down the street, earlier confirmed she had been in touch with Afzaal’s brother and sister-in-law and released a statement on their behalf.

“We need to understand that the destruction of a family in the brutal and horrific manner like this is something we must all stand against,” the statement read. “We need to stand against hate and Islamophobia and raise awareness in our communities and throughout all political spectrum.”

Yasir said the family was well-known within the local Pakistani-Muslim community.

“They were the most loving, caring and genuine family and would always greet you with a smile,” she said.

A GoFundMe says Salman Afzaal was a physiotherapist and cricket enthusiast with a “gentle and welcoming smile.”

His wife Madiha Salman, described as a caring mother and friend, was nearing the end of obtaining her PhD in civil engineering at Western University.

Yumna Afzaal was finishing her first year at Oakridge Secondary School. In a statement, the Thames Valley District School Board says she will be “deeply missed by fellow students and staff at Oakridge.”

“Hate has no place in our school system or in our community,” the statement concluded.

The GoFundMe describes the grandmother as “a pillar of their family that cherished their daily walks.”

The campaign’s organizers said funds raised will be donated.

“The family has indicated that they do not need financial assistance at the time. However, if you would like to help and donate the money will be used as Sadaqa-Jariya on behalf of the deceased,” the fundraiser reads.

“Sadaqa jariya is an important concept within Islam — it is a gift that not only benefits others in this life but also benefits us and our loved ones in the next.”

Politicians nationwide have denounced the attack. Trudeau called it a “a brutal, cowardly and brazen act of violence” in the House of Commons on Tuesday morning.

“This was no accident,” he said. “This was a terrorist attack, motivated by hatred, in the heart of one of our communities.”

Meanwhile, at the vigil a moment of silence was held for the victims.

Al-Azem said Ford’s office has ordered all provincial government buildings to fly their flags at half-mast until the funeral.

Nathaniel Veltman, 20, of London, has been arrested and charged with four counts of first-degree murder and one count of attempted murder in the attack.